No Data Shows Crimes Against Dalits Rise When BJP In Power: Rajnath Singh 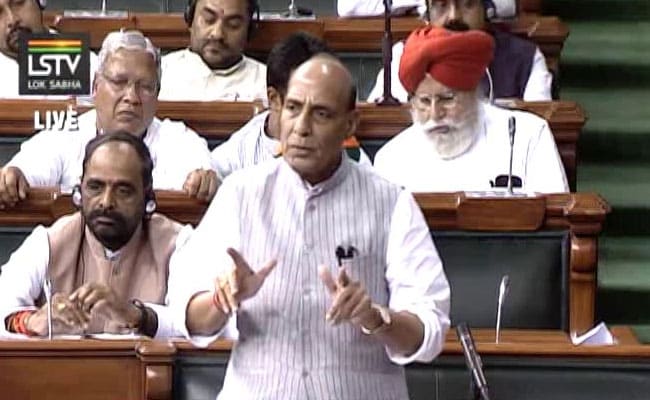 "There should be no politics on this issue," said Rajnath Singh, speaking on atrocities on Dalits.

New Delhi: In his reply to the day-long debate in parliament on the issue of atrocities on Dalits, Home Minister Rajnath Singh has said there is no data to suggest that crimes against Dalits go up when the BJP is in power. The matter, he added, should not be politicised and the society must take it as a challenge to bring an end to such incidents.

Citing data, he said, "There is no data that suggests that atrocities rise automatically when the BJP-led NDA govt have come to power."

"Blame game is not a solution. We can't make progress until the poor and downtrodden are empowered... There should be no politics over this issue. We should take it as a challenge to end this injustice," Mr Singh told Lok Sabha.

To register their protest, the Congress walked out during the minister's speech.

The nearly five-hour debate was held after the government agreed to the opposition demand -- following outrage over the increasing reports of atrocities on Dalits, including the one in Gujarat's Una, by cow vigilantes.

The government's green signal came days after Prime Minister Narendra Modi's appeal to stop the violence against Dalits. In a series of statements over the weekend, PM Modi had called for protection of Dalits and strong action against what he called "fake cow protectors".

"The Prime Minister should speak in the House. His statement outside was politically inspired and mischievous," insisted Mayawati, whose Bahujan Samaj Party is a Dalit powerhouse.

Alleging that the PM's comments were an attempt at damage control after the massive Dalit protests in Gujarat, she said, "Dalits don't need the PM's sympathy. Instead, he should ensure that Dalits can exercise their constitutional rights".

CPM member PK Biju from Kerala, who had initiated the debate, said, "I request the Prime Minister not to confine (himself) to only giving statements but also show action".

Referring to the demand for the PM to speak on the issue in Parliament, the home minister said, "Please refer to the notes dating back in time and find out... has the prime minister spoken on every single issue?"
Comments
Rajnath SinghDalit atrocitiesUnaParliamentParliament debate on Dalits