So what if security officer cleaned Mayawati's shoes, asks BSP 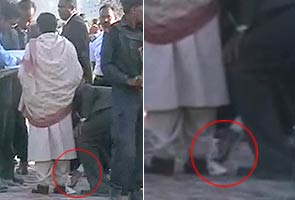 Auraiya: Mayawati's party can't understand why a security officer bending to clean the Chief Minister's shoes is a matter of any concern.

"It's the same as if it rains, and someone's shoes get dirty, and then others help to clean off the mud. What is wrong in that?" asked a BSP MLA, Syed Kazim Ali Khan.

After Mayawati got out of her helicopter yesterday, her Personal Security Officer was seen taking a handkerchief out of his pocket. He then bent to polish her footwear, while she spoke to others on an official visit to the Auraiya district in South-West UP.

The UP Cabinet Secretary too downplayed the incident. He backed the security officer and said it was his responsibility as the thing stuck in Mayawati's sandal could have caused her injury.

The security officer in question is reportedly named Padam Singh, a retired police officer who was given an extension to serve Maywati. He was allegedly seen as close to the Chief Minister and her mentor, Kanshi Ram, when they had just entered politics.

Sources say that it's Padam Singh who decides whether senior police officers in UP can get appointments with the Chief Minister.

Promoted
Listen to the latest songs, only on JioSaavn.com
J&K Chief Minister Omar Abdullah took a swipe at his UP counterpart over twitter.

He tweeted: I won't let my security chaps carry my briefcase but I guess to each their own.