Sniffing Out IEDs To Tracking Terrorists: PM Modi On Role Of Army Dogs

Mann Ki Baat: Some of these canines, PM Modi said, have even died while ensuring safety of human lives from terror-related incidents.

Prime Minister Narendra Modi, addressing the nation in his monthly radio programme Mann Ki Baat, hailed the role of dogs in the security operations in the nation. These dogs have not only played a very important role in thwarting numerous bomb blasts and terrorist conspiracies but also in disaster management and rescue missions, he said.

PM Modi specifically mentioned two such "bravehearts" -  Sophie and Vida, the two dogs of the Indian Army who have been awarded the Chief of Army Staff 'Commendation Cards' as India celebrated 74th Independence Day this year.

"Sophie and Vida received this honour because they performed their duties diligently while protecting their country. Our armed forces and security forces have many such brave dogs who not only live for the country but also sacrifice themselves for the country," PM Modi said in the 68th edition of the monthly programme that was aired today.

Vida, the dog from an Army Dog Unit located in Northern Command, was conferred the medal for detecting five mines and one grenade buried underground. Sophie of Special Frontier Force (Bomb Disposal Squad) sniffed out the presence of initiator/accelerant which could have been hastily used to fabricate an IED, thereby saving precious lives. 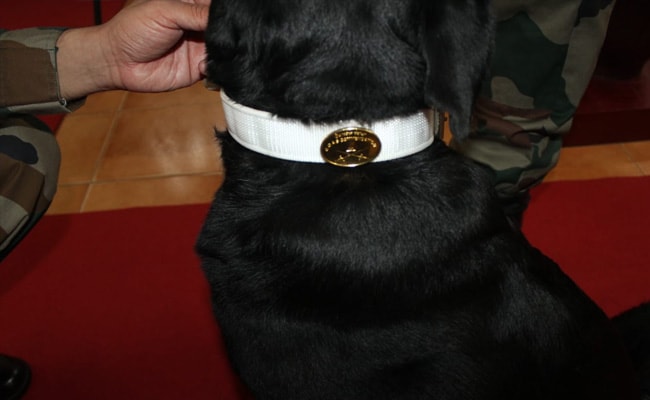 Vida was conferred the medal for detecting five mines and one grenade buried underground.

"Such canines have played a very important role in thwarting numerous bomb blasts and terrorist conspiracies," he said.

Some of these canines, PM Modi said, have even died while ensuring safety of human lives from terror-related incidents.

"Balaram sniffed out ammunition on the route of the Amarnath Yatra. Dog, Bhavana searched out IED in 2002. During unearthing the IED, terrorists triggered an explosion and  brave dog were martyred. Two or three years ago in Bijapur (Chattisgarh, a sniffer dog Cracker of CRPF also died in an IED blast," he said.

In the past one year, these dogs have contributed to 53 successful missions for the Indian Army, including tracking of terrorists and recovering individuals from snow-bound areas. In over 30 instances, these canines have sniffed out IEDs/Explosives.

The National Disaster Response Force (NDRF) also uses specially trained dozens of dogs for rescue operations. In the event of an earthquake, building collapse, these dogs are experts in searching out people trapped under debris.

The superiority of these canine soldiers employed by Indian Army has led to increasing demand for these dogs from neighbouring countries like Bangladesh, Myanmar and Cambodia. Japan also showed interest on the training standards of Indian Army canines when their Chief of Staff visited the Dog Training Facility at Meerut in 2017.