Smriti Irani was welcomed by senior officials of the ministry and Minister of State in the WCD Ministry Debashree Chaudhuri. 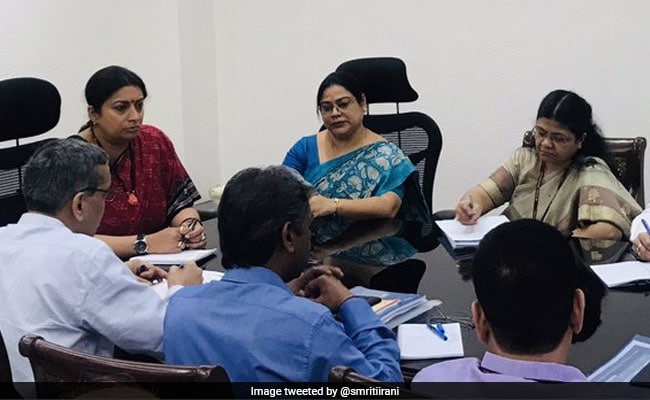 Smriti Irani with officials of the Women and Child Development ministry.

Smriti Irani today took charge as the Union Women and Child Development (WCD) Minister and vowed to fulfill her commitment towards empowering women and creating a better tomorrow for children. She was welcomed by senior officials of the ministry and Minister of State in the WCD Ministry Debashree Chaudhuri.

Soon after assuming charge, Ms Irani held a meeting with all senior officials of the ministry. "Grateful to PM Narendra Modi for reposing his faith and giving me an opportunity to contribute to the well-being of children & foster Women-led Development. We will continue to fulfill our commitment towards empowering women and creating a better tomorrow for our children(sic)," she said in a tweet soon after assuming charge and posted pictures of her meeting the officials.

The Amethi lawmaker has retained the charge of Textiles Ministry, a portfolio she held during the first term of the Narendra Modi government.

She had met her predecessor Maneka Gandhi on Saturday to discuss important issues in the ministry and the way forward in tackling them. Ms Irani emerged as a 'giant slayer' after defeating Congress president Rahul Gandhi in Uttar Pradesh's Amethi.