Smriti Irani was one of the 57 cabinet ministers who took oath with PM Modi. 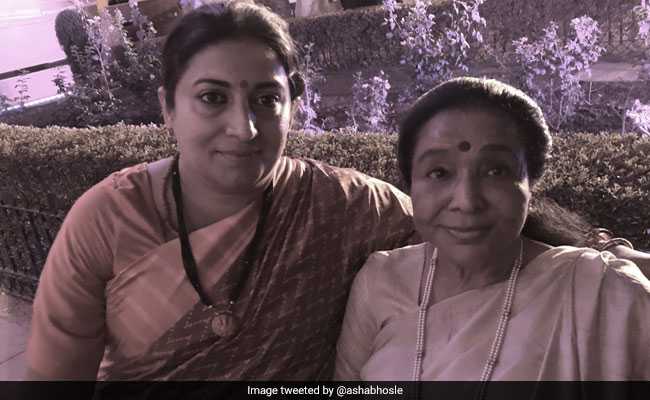 Veteran singer Asha Bhonsle has praised BJP leader Smriti Irani, newly elected lawmaker from Uttar Pradesh's Amethi, in a tweet and said she won because "she cares". Ms Bhonsle, one of the many eminent personalities who attended Prime Minster Narendra Modi's glittering oath ceremony on Thursday, shared her experience of getting "stranded in a crazy rush" after the event. It was only Ms Irani who "offered to help", she said.

Smriti Irani was one of the 57 cabinet ministers who took oath with PM Modi.

"I was stranded in the crazy rush post PM oath ceremony. No one offered to help me except @smritiirani who saw my plight & made sure I reached home safely. She cares & that's why she won," Ms Bhonsle tweeted. Ms Irani acknowledged the compliment.

The legendary singer, who started her career in 1943 when she was just 10 and holds a Guinness World Record for most number of studio recordings, also tweeted a picture of the two of them together.

Smriti Irani, 43, defeated Congress chief Rahul Gandhi in Amethi, a Nehru-Gandhi family borough which he had retained since 2004. Congress had never lost the parliamentary seat in three decades except 1998.

Ms Irani kept visiting the constituency regularly in last five years after she first challenged Rahul Gandhi in Amethi in 2014 and lost. Ahead of the elections, she had virtually stationed herself there. The Congress chief hardly visited the constituency in the run-upto national elections.

The BJP-led NDA has been re-elected for a second term with a huge mandate. PM Modi took oath on Thursday at a grand ceremony attended by nearly 8,000 guests including world leaders, industrialists, politicians, spiritual leaders and film celebrities.