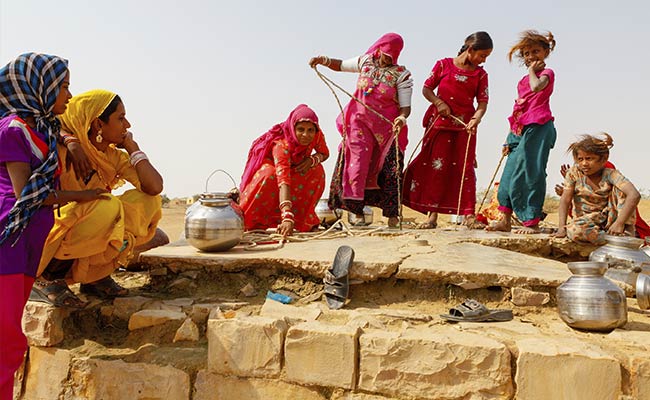 The program will be expanded to cover all of India's 750,000 villages: Smriti Irani (File)

Prime Minister Narendra Modi's government plans to employ women across villages to test water quality to combat rising challenges, amid scarcity of the resource across India.

Women in villages across 256 water-scarce districts will receive training to ensure clean water supplies, Smriti Irani, the federal minister for women & child development, said in Mumbai Tuesday. The program will be expanded to cover all of India's 750,000 villages, Ms Irani said.

Inadequate water supply, sanitation and hygiene cost India around 0.8% of its gross domestic product, according to the World Bank. The efforts to train women are part of the government's conservation plans at a time when water availability per person is expected to drop to 1,341 cubic meters by 2020 and about 70% surface water is unfit for consumption.

Ms Irani, who spoke at the Bloomberg Equality Summit, said the government treated women as equal partners in administration and wanted to ensure better pay and access to credit for women entrepreneurs. The federal government is trying to do more to ensure pay parity for Indian women, especially in the organized sector, she said.

The minister defended India's efforts to ensure women's safety. Unsafe commutes and lack of implementation of laws that protect female workers have contributed to about 20 million women -- the size of the combined populations of New York, London and Paris -- vanishing from India's workforce since 2004, the World Bank estimates.

"I think to say that women's safety issues, children's safety issues are a challenge only in a particular subcontinent, a particular country would be doing great injustice to the data that is available that every country has its own challenges with regards to safety and security of its citizens," Ms Irani said.

She said while the Indian Parliament continues to make laws for women, it is up to the society to ensure those laws are followed.

"It is the responsibility of those who are in the social segment -- be it companies, non-profits or public at large -- who need to recognize the law," Ms Irani said. "And they need to recognize that it is the woman's right to bear the fruits of that progressive law, not a woman's compulsion to stand at the end of the line waiting for the rainbow to hit her."