Pakistan-based terrorists used drones to drop two bombs at the Indian Air Force (IAF) station in Jammu's Satwari area leading to minor damage to a building and injuring two airmen in the darkness of the night. 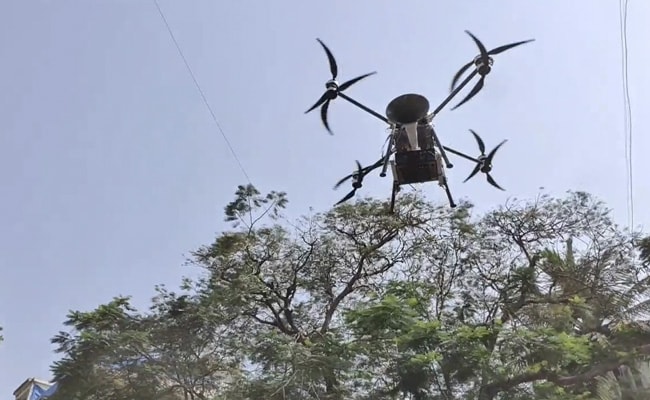 Over six lakh unregulated drones are present in the country, as per a study. (Representational)

The capability of drones to evade radar, wreak devastation at strategic installations and transport weapons to terrorists has been a continuous concern for the country's security establishment, and in a maiden incident, these unmanned vehicles were used to strike an IAF base in Jammu on Sunday, officials said.

Pakistan-based terrorists used drones to drop two bombs at the Indian Air Force (IAF) station in Jammu's Satwari area leading to minor damage to a building and injuring two airmen in the darkness of the night.

The defence and internal security matrix of the country has been talking about threats posed by small and remote-controlled unmanned vehicles for the last two to three years with occasional incidents of Pakistan-sponsored armed drones being neutralised by the Border Security Force (BSF), the Punjab Police and other agencies along the India-Pakistan border.

A clutch of ministries and departments like that of home, civil aviation, Bureau of Civil Aviation Security (BCAS), the Central Industrial Security Force (CISF) and the IAF have been working on plans and technologies to check and combat such attacks at sensitive civil airports and other facilities.

The central police think tank called the Bureau of Police Research and Development (BPRD) has also held a few multi-stakeholder national conferences on the subject to find out the most effective methods, both technology-wise and monetarily, to jam and neutralise these threats.

"We are still to get the most suitable technology to thwart armed drones along the border. The interceptions made till now has been because of the vigilance of troops on duty," a senior BSF officer said.

He said multiple incidents of arms and drugs carrying drones and quad-copters being flown from Pakistan into the Indian side in Jammu and Punjab have been noticed in the last few years and all of them have been thwarted.

However, a senior home ministry officer said that there have been incidents when drones were used for surveillance of Indian border assets and positions. But as soon as they were spotted and reaction mounted, the floaters rushed back to base where either terrorist elements or Pakistan military soldiers could be handling the remote, the officer said.

Both the International Border and the Line of Control (LoC) region along Pakistan have had their share of such incidents which have been flagged by the Army.

Deep inside the country, the tarmac and the city-side of civil airports are vulnerable when it comes to dropping bombs or surveillance by drones.

A proper standard operating procedure (SOP) is in the making with the IAF supposed to be the first responder and the snipers of the CISF and the commando force, National Security Guard (NSG), desired to chip in case of an emergent threat.

"We need a comprehensive plan and plan of action to check the menace of drones. Every agency, be it at the borders or in cities or airports, needs to have specific responsibility along with required technology tools," a senior officer in the security establishment said.

A data estimation study conducted by multiple security agencies in 2019 stated that over six lakh unregulated drones, of various sizes and capacities, are present in the country and any of them can be used for launching a nefarious act by disruptive elements.