Senior CPM leaders S Ramachandran Pillai, Biman Bose and Hannan Mollah were dropped from the polit bureau as they crossed the upper age limit of 75 years. 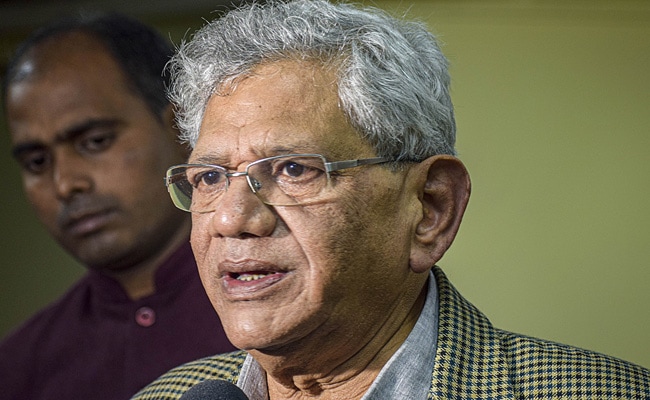 Senior CPI(M) leader Sitaram Yechury was re-elected as the General Secretary of the party for the third consecutive time in Kannur on Sunday.

Speaking to the delegates after being re-elected to the top post at CPI(M)'s 23rd Party Congress, Mr Yechury said the principal task of the party was to isolate and defeat the BJP, which is pursuing the Hindutva communal agenda of the fascistic RSS.

He said isolation and defeat of the BJP was essential not only for our forward march for human liberation but to safeguard India as a secular democratic republic.

The Party Congress also selected 17-member polit bureau and 85-member central committee to lead the party for next three years.

Senior leader from West Bengal, Ram Chandra Dome was elevated to the polit bureau from the central committee and has become the first Dalit representation in PB ever.

Two new faces - LDF convenor A Vijayaraghavan from Kerala and All India Kissan Sabha president Ashok Dhawle - have also been selected to the polit bureau of the CPI(M).

Meanwhile, senior leaders S Ramachandran Pillai, Biman Bose and Hannan Mollah were dropped from the PB as they crossed the upper age limit of 75 years. However, all three of them are now special invitees to the central committee.

Among the 85-member central committee, 17 are fresh faces, while 15 are women members.

The five-day-long national conference of the Left party will come to an end today with a massive rally at Kannur.