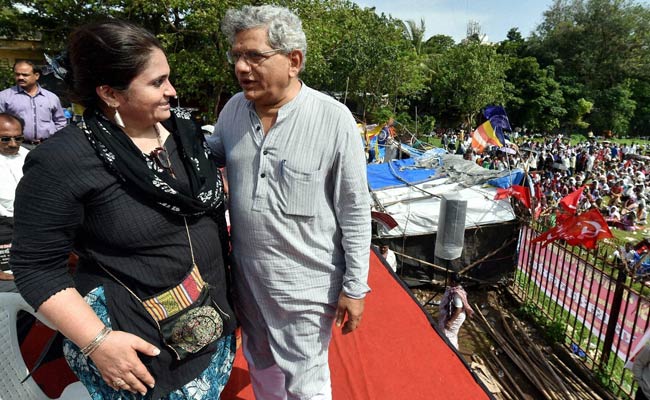 Sitaram Yechury and social activist Teesta Setalvad during the CPI(M) rally at Azad Maidan in Mumbai on Saturday. (Press Trust of India)

Mumbai: CPI(M) leader Sitaram Yechury today said Prime Minister Narendra Modi has become 'Maunendra Modi' due to his "silence" over corruption and claimed that agenda of the Monday's all-party meeting, convened to break Parliamentary logjam, was not explained to him by the BJP.

The CPI(M) General Secretary blamed the BJP Government for the ongoing impasse in Parliament.

The veteran Communist leader accused the Modi government of indulging in "divisive politics" and pursuing "anti-poor policies" which he said have led to drop in living standards of people in the country.

The BJP-led government in Maharashtra is following the same policies as pursued by the NDA administration at the Centre, he said while addressing a rally at Azad Maidan in South Mumbai.

"Modi, who earlier boasted of rooting out corruption, is now silent over a series of corruption cases, including Vyapam, and charges against four Deviyan (a reference to Vasundhara Raje, Sushma Swaraj, Pankaja Munde and Smriti Irani), which has resulted in an unprecedented logjam in Parliament," the Rajya Sabha MP maintained.

"Modi has turned into 'Maunendra Modi'. It is his Government, and not us (Opposition), which is holding
Parliament to ransom," the 62-year-old leader asserted.

"It is the Government's responsibility to ensure that the House functions smoothly. If the Government acts on what we have been suggesting (drop BJP Ministers facing charges), Parliament will function without any hindrance," he said.

Mr Yechury said that he got a call to attend an all-party meet convened by the BJP-led Government to break the deadlock in Parliament, but was not specifically told about its agenda.

Social activist Teesta Setalvad shared the dais with CPI(M) leaders at the rally.

"Terrorism has no link with religion and it has to be dealt strictly. But there can't be two parameters for delivering justice," said Mr Yechury.

The CPI(M) leader was here to launch a 14-day long protest organised by his party in the BJP-ruled states. He accused the BJP governments of being "anti-poor", "anti- farmers" and "anti-adivasis".

Accusing the Modi government of practising "crony capitalism", the CPM leader said its economic policies have proved "disastrous" and aggravated the agrarian distress, leading to a significant rise in number of farmer suicides.