Mangan, the district headquarter town of North District, has been cut off from Gangtok, a distance of 74 km, due to a landslide at Ambithang. 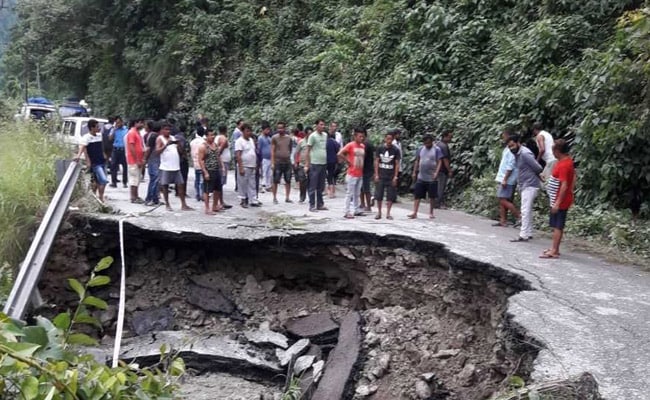 Landslides have occurred at Dzongu, Mangan, Lachen and Mangshilla in Sikkim

The landslides have occurred at Dzongu, Mangan, Lachen and Mangshilla in North District, he said.

Mangan, the district headquarter town of North District, has been cut off from Gangtok, a distance of 74 km, due to a landslide at Ambithang.

The road link between Mangan and Chungthang has also been snapped after a bridge was washed off at Rafong Khola.

The Ambithang jhora is also flowing in full spate damaging culverts and the newly constructed bailey bridge near Toong has been damaged.

The road network in Dzongu has been affected at multiple places with reports of landslides.

The entire areas of upper Dzongu have been cut off due to landslides near Mantam lake.

The rains and widespread landslides have affected about 50 houses in the district.

Many houses near Rafong Jhora have become unsuitable for human habitation and residents of those houses have been directed to shift to safer location.

District Collector, Karma R Bonpo, along with the sub divisional magistrates of Mangan and Dzongu subdivisions, senior police and transport officials made a survey of the affected areas in Mangan, Mangshilla, Dzongu Friday to assess the situation.

Schools in North District have been directed to shut Saturday to ensure safety of students.

The Border Roads Organisation is working on restoration of the road network in the district.

Relief and ex-gratia as per norms will be released to the affected people, the official said.

As it is raining heavily in north Sikkim, so civil defence, volunteers and the public have been alerted in downstream areas such as Singtam and Rangpo about possibility of rising water level.