Freebies "won't deliver new airport or new medical college", PM Modi said. "If you give things for free, then how can you build airports or roads?" 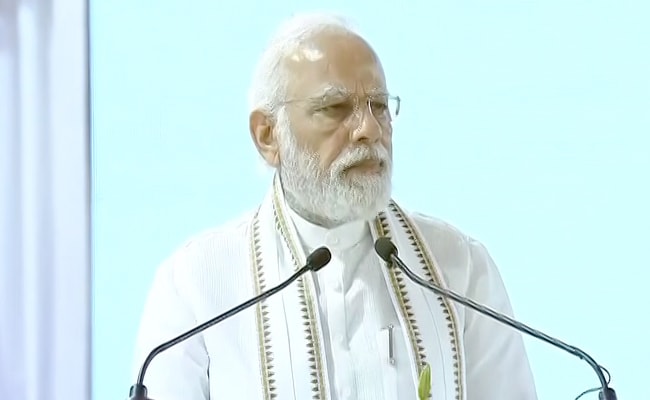 PM Narendra Modi was in Jharkhand to inaugurate the AIIMS and a new airport.

Prime Minister Narendra Modi today took a dig at the opposition parties and cautioned against "politics of shortcuts", saying it can "destroy" the nation. Speaking at a programme in opposition-ruled Jharkhand, he said, "Stay away from politics of shortcuts... Short cut leads to short circuit".

Targeting the move of many parties to offer freebies at election time and after, PM Modi, who was in Deoghar to inaugurate the AIIMS and a new airport, made it clear that opposition parties that promise to give freebies cannot build new airports or hospitals or highways in the country.

Freebies "won't deliver new airport or new medical college", PM Modi said. "If you give things for free, then how can you build airports or roads?"

In Jharkhand, one of the country's most under-developed and cash-starved states, a number of subsidies have been announced by Chief Minister Hemant Soren, whose government is backed by the Congress and Lalu Yadav's Rashtriya Janata Dal.

Like the Arvind Kejriwal government in Delhi, Jharkhand is providing free electricity upto 300 units, besides loan waivers for farmers, which was a key poll promise.

Driving home his point, PM Modi said, "I had the opportunity to visit Deoghar to lay the foundation stone of an airport and today I have inaugurated it".

"Today we have brought a work culture, a political culture, and a governance model wherein we inaugurate everything that we lay the foundation stone of," he added.

The provision of free electricity in Jharkhand has been criticised by many. On social media, critics pointed out that while it suits the national capital or a rich state like Punjab, Jharkhand can ill afford such subsidies.

PM Modi, however, refrained from directly attacking the Hemant Soren government, which many of the earlier speakers did. This is seen as an effort to keep the relations on an even keel with Mr Soren's Jharkhand Mukti Morcha, which is expected to vote for NDA's Presidential candidate Draupadi Murmu in the July 18 elections.