This is the first event in which the Ambanis and Shloka Mehta have been seen since her star-studded engagement parties a week ago. 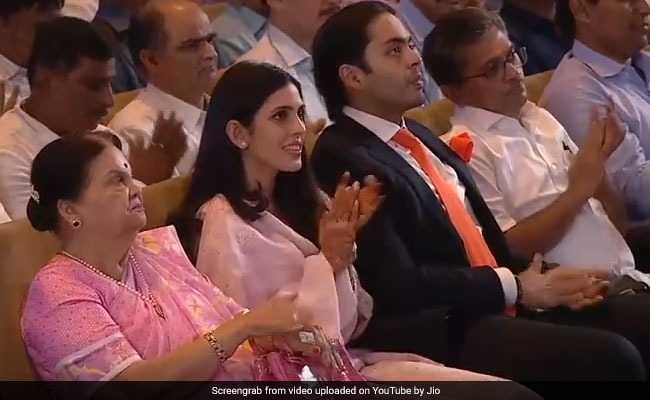 She was seated between Akash's younger brother Anant and his grandmother Kokilaben Ambani. Shloka Mehta watched as Akash and his twin sister Isha demonstrated the company's latest offering, Reliance JIO Gigafibre that promises broadband at faster speeds and video calling.

This is the first event in which the Ambanis and Shloka Mehta have been seen since her star-studded engagement parties a week ago.

The pre-engagement and engagement parties were attended by top celebrities in India including filmstars.

In videos floating on social media, Isha Ambani was seen performing an arti for Shloka and Akash, and then Shloka is seen touching Isha's feet.

The two, who share a close bond, are seen hugging after the arti. Isha Ambani had said that Shloka has always been a part of their family and that the engagement just "officialised" the fact that they were sisters.

Akash and Shloka, who met in school, are set to be married in December.