Isha Ambani had said that Shloka Mehta has always been a part of their family and that the engagement just "officialised" the fact that they were sisters. 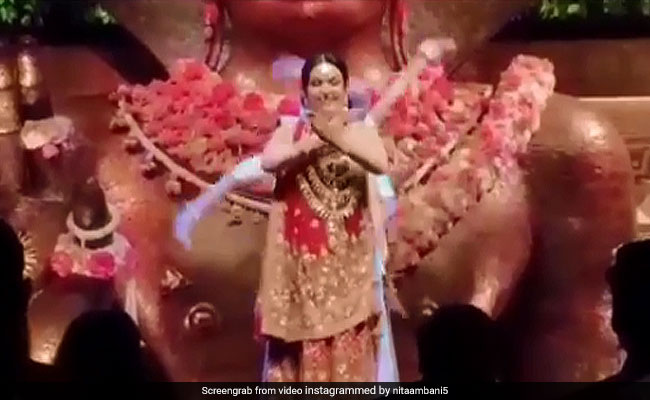 Nita Ambani danced to a bollywood song at the pre-engagement party of Akash Ambani and Shloka Mehta.

A glowing Nita Ambani was seen dancing to a Bollywood number at the star-studded party ahead of her eldest son Akash's engagement with Shloka Mehta on Thursday evening. Ms Ambani, who is trained in Bharatnatyam, danced to Shubhaarambh from the film Kai Po Che.

Another video doing the rounds on social media shows Akash Ambani's twin sister Isha performing an arti for Shloka and Akash, with traditional Gujarati songs playing in the background. Shloka is then seen touching Isha's feet. The two, who share a close bond, are seen hugging after the arti, as other family members look on.

Isha Ambani had said that Shloka, the daughter of diamantaire Russell Mehta who heads Rosy Blue Diamonds, has always been a part of their family and that the engagement just "officialised" the fact that they were sisters. The bride-to-be looked stunning in her Abu Jani Sandeep Khosla lehenga.

The party, hosted at Mukesh Ambani's 27-storey south Mumbai home Antilia, saw the who's who of Bollywood, cricket and showbiz in attendance. Sachin Tendulkar and wife Anjali, Shahrukh Khan, Priyanka Chopra, Nick Jonas, Karan Johar, Alia Bhatt and Ranbir Kapoor were among those who attended.

On Wednesday evening, the Ambanis hosted a mehendi ceremony for Akash and Shloka. The engagement of Akash Ambani and his childhood friend, Shloka was first announced in March this year. The two had exchanged rings at a ceremony in a resort in Goa in the presence of family and close friends. Soon after the engagement, the family threw a star-studded bash.

Isha Ambani and Anand, son of business tycoon Ajay Piramal, got engaged in May.

Both the Ambani weddings are set to take place in December this year. Earlier this month, the Ambanis had announced the engagement party for Akash and his fiancee with an invite that came with a minute-long montage video of the couple, set to a popular Bollywood song.