Ghazipur is one of the many that have sprung up along the national capital's border over the past two months. 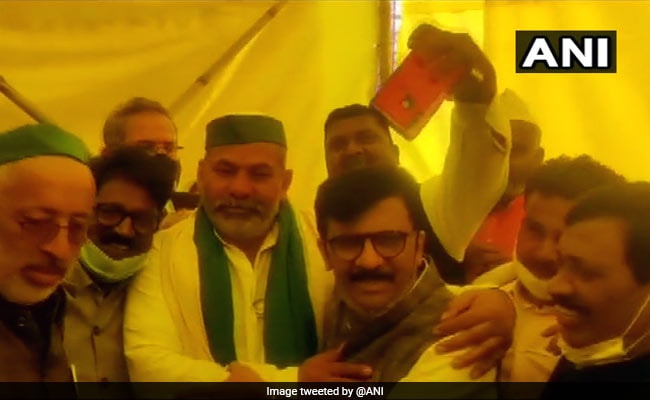 Shiv Sena Rajya Sabha member Sanjay Raut today met farmers protesting at the Ghazipur border point between Delhi and Uttar Pradesh. Like many others, his party, too, has expressed its support for their agitation and demanded the withdrawal of the three new farm laws that they have been objecting to.

Mr Raut, who is also the Executive Editor of the Shiv Sena's mouthpiece, Dainik Saamna, was today joined by Sena MP Arvind Sawant during the meeting.

Ghazipur is one of the many that have sprung up along the national capital's border over the past two months. This is where the Uttar Pradesh segment of protesting farmers has mostly been camped. It gained prominence since the Republic Day violence in the wake of a viral video of Rakesh Tikait, spokesperson of the Bharatiya Kisan Union, breaking down into tears.

After meeting Mr Tikait, he said, "The way vandalism unfolded here after January 26 and an attempt made to suppress the movement and Tikait, we felt it is our responsibility to stand by the farmers and extend support of the whole of Maharashtra, Shiv Sena, and Uddhav Thackeray saahab."

Earlier in the morning he tweeted "hailing" the agitation and said Maharashtra Chief Minister Uddhav Thackeray himself had asked him to visit the protest site.

"Maha Vikas Aghadi government has taken several decisions in favour of farmers. Chief Minister Uddhav Thackeray has always stood by them in their good and bad times. I am visiting Ghazipur border to meet the farmers at his behest," he had tweeted.

The Shiv Sena leads the Maharashtra Vikas Aghadi (MVA) government of Maharashtra, of which with Nationalist Congress Party and the Indian National Congress are part. The Maratha party was till 2019 the BJP's oldest ally, but parted ways and formed the new ruling alliance.

MVA leaders have been saying that the Maharashtra government will form a committee in the state to make sure the new farm laws are not implemented in the state. Balasaheb Thorat, state Revenue Minister and state Congress President, will head the panel.

Something Being Covered Up: Nawab Malik On Politicians Ban In West Bengal