Shiv Sena Predicts Opposition Strength In Parliament To Increase In 2019

Shiv Sena, BJP's ally at the centre and in Maharashtra, also said that the opposition does not have a formidable leadership to take on the ruling party. 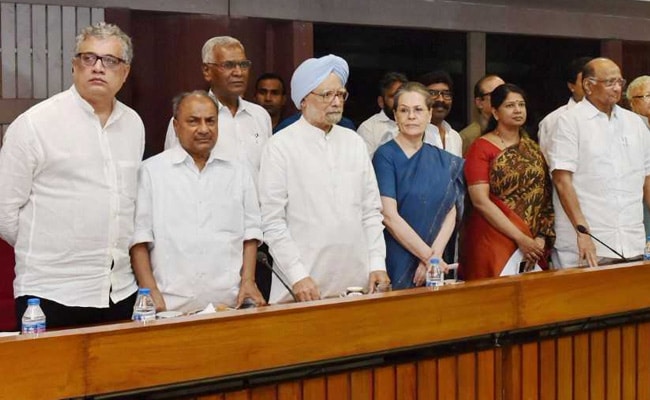 Shiv Sena predicts the opposition numbers to go up after the 2019 general elections. (File)

Mumbai: Predicting a change in the parliamentary arithmetic of the BJP and Congress in 2019, the Shiv Sena today said the UP and Bihar bypoll results would give a major boost to the opposition.

However, the opposition does not have a formidable leadership to take on the ruling party, Shiv Sena, BJP's ally at the centre and in Maharashtra, said.

Congress president Rahul Gandhi will have to fight the "image" of Prime Minister Narendra Modi in the next general elections, an editorial in the Sena mouthpiece 'Saamana' said,

In a stunning blow to the BJP ahead of the 2019 general elections, the party yesterday lost the bypolls to all three Lok Sabha seats it contested, including its bastion Gorakhpur, and Phulpur in Uttar Pradesh, besides Araria in Bihar.

The Sena editorial stated that the bypoll results would give a boost to the opposition, adding that people were now out of their "illusionary world".

"People now realise they have been cheated. However, the opposition does not have a formidable leadership to further ignite the flame of the restlessness among people," the Sena said.

However, the Sena forsees a change in the parliamentary strength of the BJP and the Congress after the general elections next year.

"The party of Modi-Shah (the BJP) has a strength of 280 in the Lok Sabha, while the Congress does not even have 50. If other opposition parties are added, their strength does not even go up to 150. This was the situation in 2014. The situation will surely change in 2019," it said.

The Sena said Narendra Modi had made an image similar to that of a big screen hero, adding the Congress president will have to fight this image (of PM Modi).