The change in the stance comes a day after Congress leader Rahul Gandhi expressed displeasure over the Sena backing the bill in Lok Sabha. 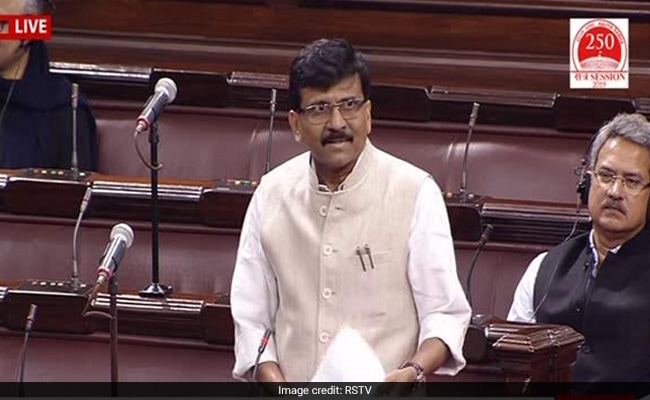 Since yesterday I am hearing that those not supporting the Bill are traitors: Sanjay Raut

The Shiv Sena on Wednesday staged a walkout ahead of voting on the contentious Citizenship Amendment Bill in Rajya Sabha, citing unsatisfactory response to the queries raised by the party.

Justifying the move, seen as a U-turn after the party voted in favour of the bill in Lok Sabha on Monday, Shiv Sena MP Sanjay Raut said the government did not give satisfactory answers to the concerns raised by the party.

The change in the stance comes a day after Congress leader Rahul Gandhi expressed displeasure over the Sena backing the bill in Lok Sabha.

"The #CAB is an attack on the Indian constitution. Anyone who supports it is attacking and attempting to destroy the foundation of our nation," Gandhi had tweeted.

Maharashtra Chief Minister Uddhav Thackeray had then said the Sena won't back the bill in Rajya Sabha till there is clarity on the party's queries posed in Lok Sabha.

The Shiv Sena is in alliance with the ideologically opposite Congress and NCP, both of whom voted against the bill.

The bill, which seeks to provide Indian citizenship to non-Muslim refugees coming from Pakistan, Bangladesh and Afghanistan after facing religious persecution there, was passed by Rajya Sabha on Wednesday. Lok Sabha passed the bill on Monday.

Participating in the discussion on the bill in Rajya Sabha, where the Shiv Sena has three members, Mr Raut said the party does not need to prove how "staunch Hindu" and "patriotic" it is and asserted that it is headmaster in the "school" of Hindutva where BJP leaders "study".

In his brief speech, senior Shiv Sena leader Sanjay Raut said, "Since yesterday I am hearing that those not supporting the Bill are traitors and are speaking the language of Pakistan."

"We don't need any certificate to prove how patriotic we are and how staunch Hindu we are. We are headmaster in a school (Hindutva) that you study. Our school headmaster was Bal Thackeray and Atal (Bihari Vajpayee) ji and Syama Prasad Mookerjee. We believe in them," he added.

He was referring to Prime Minister Narendra Modi's reported comment that some parties were speaking in the same language as Pakistan on the Bill.

Rebutting the prime minister's remarks, Mr Raut said, "This is not the Pakistan assembly. People in India have voted for members sitting in the treasury as well as opposition benches. If you don't like Pakistan's language, there is a majority government which can eliminate Pakistan. We are with you."

Addressing the BJP parliamentary meeting Wednesday morning, PM Modi said some political parties were speaking the same language as Pakistan, "including the full stop and comma".

Mr Raut, whose party is a former ally of the BJP, further said, "We should discuss this Bill under the prism of humanity, and not religion. There is a difference between intruders and refugees."

He said there should not be any "vote-bank politics" while giving citizenship to non-Muslim minorities under the Bill and added that there will be "some balance" if voting rights are not given to them for 25 years.