Shatrughan Sinha-- who has been making savage attacks on Prime Minister Narendra Modi-- thanked Mamata Banerjee for bringing the anti-BJP parties on the same platform. 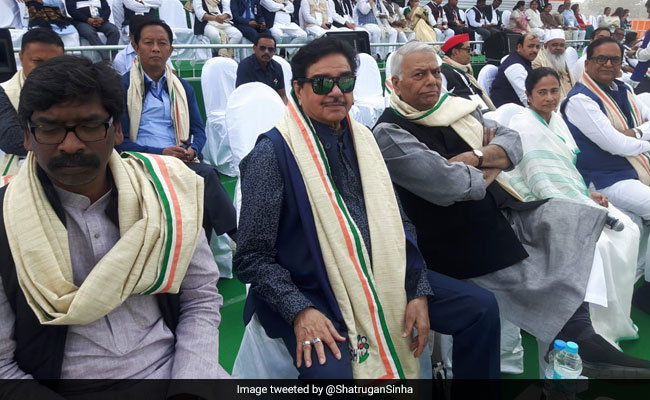 A day after attending West Bengal Chief Minister Mamata Banerjee's rally for the anti-BJP politicians in Kolkata, BJP lawmaker Shatrughan Sinha said the parties gathered for a "common cause of saving the Indian democracy from being ruined". The parliamentarian from Patna Sahib-- who has been making savage attacks on Prime Minister Narendra Modi-- thanked the Trinamool chief for bringing the opposition parties on the same platform

BJP leader Shatrughan Sinha on Saturday stepped up his attack on the centre over the controversial Rafale fighter jet deal and said Prime Minister Narendra Modi must answer a few questions else he will have to hear "chowkidaar chor hai (the watchman is a thief)".

After the rally, BJP spokesperson Rajiv Pratap Rudy said the party has taken "cognizance" of Mr Sinha's presence at the rally.

Today, Mr Sinha renewed his attack, saying the rally had only one agenda-- "Free India of Arrogance and Dictatorial Governance".

"What an amazing gathering and what a mammoth audience that came together in Bengal in lakhs to listen to and support this spontaneous show of solidarity in favour of a change...parivartan!" he tweeted.

"Kudos to our sister, the great lady of Bengal, the fiery Mamata di, who needs to be roundly complimented for bringing together one of the largest congregations of the strongest and most influential political minds and leaders from all corners of the country on the same stage under a common cause...of saving the Indian democracy from being ruined..." he added.

parties cutting across party lines were present.
The gathering was a wake up call for the Govt at the centre in many ways. All leaders of the 'Mahagathbandhan' were united & focused as they all had one agenda - "Free India of Arrogance and Dictatorial Governance". Each leader pic.twitter.com/bndOK2Gp1e

spoke extremely well, raising all the problems & unanswered burning issues which have long been pending. Unemployment, demonetisation, GST, soaring fuel prices, ED, CBI & most importantly the Rafael issue etc.
I was present as the representative of Rashtra Manch, under the pic.twitter.com/XpD4ffSInb

Leaders of 22 opposition parties came together in Kolkata on Saturday as a show of strength at the rally, organised by Ms Banerjee. AAP's Arvind Kejriwal, TDP's Chandrababu Nadu, SP's Akhilesh Yadav, DMK's MK Stalin were among the attendees. Congress chief Rahul Gandhi and BSP leader Mayawati gave the rally a skip, but they sent their representatives.

Shatrughan Sinha was a union minister in the Atal Bihari Vajpayee government. He had contested and won the Lok Sabha polls on a BJP ticket from Patna Sahib in 2014, but grew apart from the top leadership after being ignored for a ministerial berth. Over the years, he has been attacking PM Modi. His most recent dig at the party was when he came out in favour of setting up a Joint Parliamentary Committee to look into alleged financial irregularities in the Rafale deal, a vehement demand made by the opposition parties led by the Congress.