Acharya Pramod Krishnam, the Congress candidate in Lucknow, had a problem with Shatrughan Sinha campaigning for a rival candidate -- even if she happened to be his own wife. 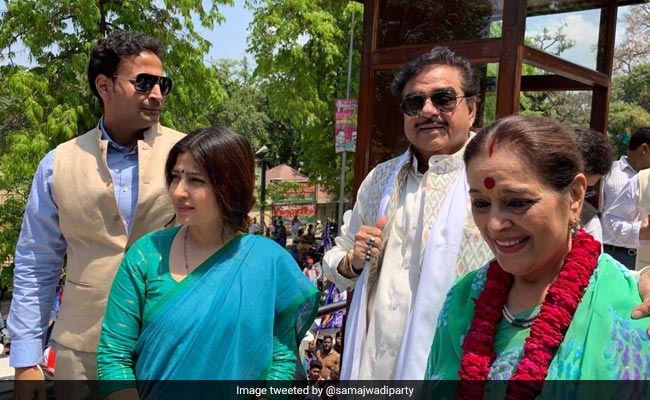 Congress leader Shatrughan Sinha had campaigned for his wife - Samajwadi Party candidate Poonam Sinha - in Lucknow two days ago, angering many in his own party. A day later, he tweeted out the reason: Supporting one's wife is every husband's duty.

"Yesterday was a big and special day for my family as my better half, the graceful and radiant #PoonamSinha, embarked on a new chapter of her life. I stood by her as a dutiful husband amidst remarks of me crossing party lines to campaign for my wife. But my stance was loud and clear," the politician - who had recently left the BJP to join the Congress - said on Twitter.

Contesting against Poonam Sinha is the BJP's Rajnath Singh and Congress candidate Acharya Pramod Krishnam. It was Acharya Krishnam who had a problem with Shatrughan Sinha campaigning for a rival candidate, even if she happened to be his own wife.

The actor-turned-politician leader acknowledged this, but insisted that family is important too. "I learnt that there were mixed reactions to my action. Some said I was behaving in my authoritative style as a star, others said that I did no wrong... but as I said, I will serve the people of Lucknow," he said in another tweet, expressing his gratitude to the Gandhi family for giving him an "opportunity to fight this battle".

Acharya Krishnam was particularly affronted by Shatrughan Sinha terming the Bahujan Samaj Party (BSP)-Samajwadi Party-Rashtriya Lok Dal (RLD) alliance in the state as a "powerful and huge" force. "He came here to fulfil his duty as a husband, but I would like to tell him that he should now campaign for his party and fulfil his political dharma," the Congress candidate said.

The Congress was denied a place in the grand alliance against the BJP in Uttar Pradesh. As per the seat-sharing arrangement between the three parties, the Samajwadi Party will contest from 37 seats, BSP from 38 and the Ajit Singh-led RLD from three.

Poonam Sinha had joined the Samajwadi Party on April 16. Her husband will be taking on the BJP's Ravi Shankar Prasad in Bihar's Patna Sahib constituency on a Congress ticket.