Acharya Pramod Krishnam's candidature against Rajnath Singh from Lucknow was announced by the Congress for the ongoing Lok Sabha polls that began on April 11. 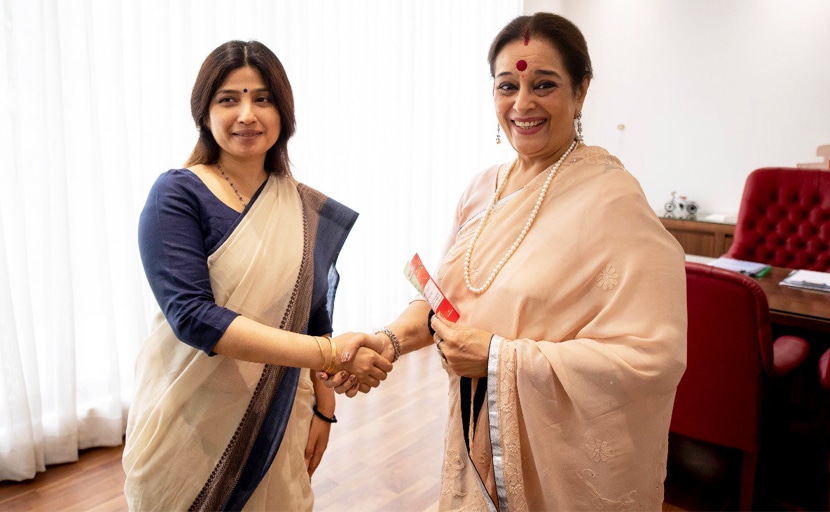 Poonam Sinha was welcomed into the party by Dimple Yadav, the wife of Samajwadi chief Akhilesh Yadav.

Congress candidate Shatrughan Sinha's wife Poonam Sinha is the candidate of the opposition gathbandhan or alliance in Uttar Pradesh's Lucknow, a prestigious constituency that has voted BJP since 1991. In this unusual mix, the Congress has decided to field its own candidate against Poonam Sinha and the BJP's Rajnath Singh, the Union Home Minister running for a fifth term in parliament.

The Congress has picked self-styled spiritual guru Acharya Pramod Krishnam as its Lucknow candidate. That complicates matters for Poonam Sinha, who joined the Samajwadi Party on Tuesday, and was named as the candidate of the opposition alliance from the Uttar Pradesh capital.

Acharya Pramod Krishnam, born on July 2, 1962, runs an ashram in Sambhal. He was the Congress's candidate from Sambhal in the 2014 Lok Sabha elections but finished fifth. He made headlines in 2015 when he equated Prime Minister Narendra Modi with the Indian Mujahideen and blamed him for "growing intolerance" in the country. Before he was nominated by the Congress in 2014, Mr Krishnam had launched a party called the Hindustan United Movement.

Mr Krishnam's candidature was announced by the Congress along with two other names for the ongoing Lok Sabha polls that began on April 11 and go on till May 19. Results are due on May 23.

The Congress's move to announce Mr Krishnam's candidature on the same day that Poonam Sinha emerged as the pick for the alliance of Akhilesh Yadav's Samajwadi Party and Mayawati's Bahujan Samaj Party, is seen to underscore Congress chief Rahul Gandhi's stand of "fighting on the front-foot" despite being left out of the opposition coalition.

Poonam Sinha was welcomed into the Samajwadi Party by Dimple Yadav, the wife of party chief Akhilesh Yadav, with just two more days before nominations close for Lucknow.

The BJP counts Lucknow as one of its strongholds in Uttar Pradesh, which sends 80 members to parliament. The party's iconic leader Atal Bihari Vajpayee held it from 1991 to 2004. Rajnath Singh, who fought the 2009 Lok Sabha polls from western Uttar Pradesh's Ghaziabad, took over the Lucknow seat in 2014.

Asked about Poonam Sinha as a rival, Rajnath Singh said on Tuesday: "Yes somebody must contest, that is the beauty of democracy. We will fight elections with full dignity, tehzeeb jo Lucknow ki bohot badi dharohar hai usko bhi hum kayam rakhenge (we will maintain the decorum that is the legacy of Lucknow)."