"There definitely is a perception of regime change at the centre.... There is incredible disillusionment against Modi," Shashi Tharoor said 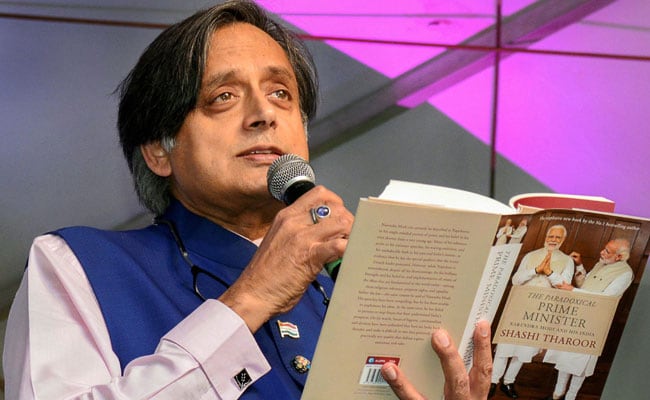 Congress leader Shashi Tharoor on Friday claimed that there was 'definitely' a perception of regime change at the centre in view of what he called "incredible disillusionment' against Prime Minister Narendra Modi for not delivering on his promises.

Shashi Tharoor was in Bengaluru to read out a few excerpts from his book - 'The Paradoxical Prime Minister.'

"There definitely is a perception of regime change at the centre.... There is incredible disillusionment against Modi. Many also have reacted to communal violence and cow vigilantism, saying that this is not we have voted for. They expected Modi to deliver on his promises, which he has failed in almost all of them," the Congress MP told PTI.

Asked about the prospects of the Congress in Madhya Pradesh, Rajasthan and Chattisgarh, which went to the polls Friday, along with Telangana and Mizoram, he said he was quite confident of the party winning at the hustings as people were 'disillusioned' with PM Modi's rule.

Mr Tharoor also said he did not agree with the 'violent protests' held by the BJP in Kerala over the Sabarimala issue. "We have to respect the Constitution and rule of law," he added.

However, questions must be asked about what should be the permissible domain for the judiciary to enter into matters of religion, he said.

"To my mind, those lines can be drawn simply by the judiciary and if it refuses then it can be drawn by the legislature through constitutional amendments," he said.

Shashi Tharoor had last month asked the BJP and RSS not to "desecrate" the Sabarimala temple and termed as "utterly disgraceful" the violence at the hill shrine.

He had also blamed the state government for acting in "haste" and not consulting the stakeholders before implementing the Supreme Court verdict, permitting women of all age groups to offer prayers at the Lord Ayyappa shrine.

On the row over Aljo K Joseph appearing for Christian Michel, the alleged middleman in the Augusta Westland chopper scam, he said his expulsion from the youth Congress clearly indicated that the party did not endorse his action.

"The immediate decision to expel Joseph from the party is a clear indication that the Congress did not endorse his appearing for Michel," Shashi Tharoor said.