At the Shanghai Cooperation Organisation meet Ajit Doval called for an action plan to combat terrorist outfits like LeT and JeM, and suggested a MoU with the Financial Action Task Force (FATF) to counter financing of terrorist activity in the region 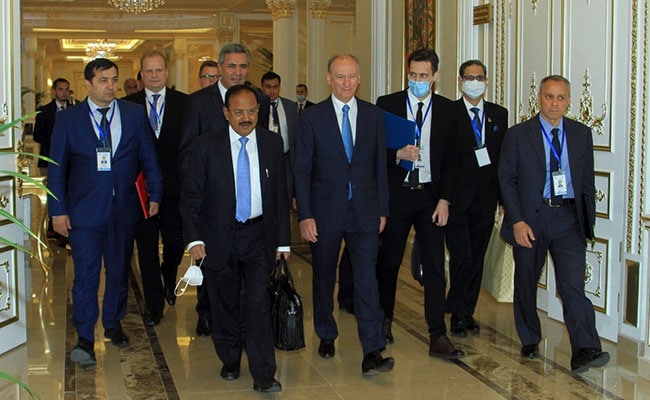 Mr Doval also emphasised adoption of international standards - including a potential MoU with the Financial Action Task Force (FATF) to counter financing of terrorist activity in the region.

The NSA's stern words came as his Pakistani counterpart - Moeed Yusuf - was present in the audience. News agency PTI said no meetings planned between the two during this summit.

Speaking in Dushanbe, the capital of Tajikistan, where the two-day SCO summit concludes today, Mr Doval also flagged the need to fully implement United Nations resolutions on terrorism this regard and called for sanctions against UN-designated terrorist individuals and entities.

He said India strongly condemned terrorism in all its forms and is committed to bringing terrorists - including those who indulge in cross-border attacks - to justice. He also underlined the need to monitor terrorists' use of technology, including the dark web and drones to smuggle weapons.

Over the years India has repeatedly flagged the operation of terror outfits like LeT and JeM , which have carried out attacks like those on the Indian parliament and the 26/11 strike.

India has also repeatedly called on Pakistan to take "immediate, sustained and irreversible" action to ensure that no territory under its control is used for launching such attacks.

Earlier this month global anti-terror watchdog FATF - which continues to retain Pakistan on its "grey list", said the country would also be put on an "enhanced follow-up" list as it monitors progress in implementing measures to curb money laundering to finance terrorist activities.

Pakistan was put on the grey list by the FATF in June 2018.

At today's meeting Mr Doval also pushed for greater connectivity between member nations through initiatives like the Chahbahar Port in Iran and the establishment of regional air corridors.

Connectivity, however, must respect sovereignty and territorial integrity, he underlined.

He also stressed the need to "preserve gains made in the last two decades in Afghanistan". Part of this edition of the SCO summit is the evolving political and security situation in Afghanistan.

On the sidelines of today's meeting of NSAs from member nations, Mr Doval also had a long meeting with his Russian counterpart, Nikolai Patrushev.

The two discussed bilateral, regional and global issues, and plans for India-Russia interaction, including cooperation between the two nations' security and law-enforcement agencies.

Formed in China in 2001, the SCO is an eight-member economic and security bloc that also includes Russia, and is viewed as a counterweight to NATO, or the North Atlantic Treaty Organisation.

Initially an 'observer nation', India became a permanent member in 2017.