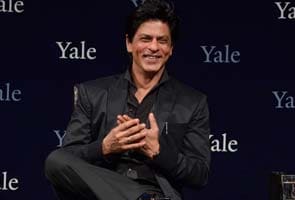 New Delhi: The Indian government has summoned the US Deputy Chief of Mission for detaining actor Shah Rukh Khan at an American airport. Earlier, US apologised to the actor for any inconvenience when he was detained for over two hours at an American airport and said it would put in place systems that can help address such circumstances.

US Embassy spokesperson Peter Vrooman said many Americans are great fans of Indian movies and respect the work of "great actor" Shahrukh Khan.

"Please allow me on behalf of our diplomatic mission in India to apologise if Mr Shahrukh Khan experienced an inconvenience or delay yesterday in White Plains, New York on his way to Yale University," he told reporters here.

Mr Khan was detained at a New York airport for over two hours by immigration officials after arriving from India in a private plane with Nita Ambani, to address students at Yale University here.

While Nita, wife of Reliance Industries Chairman Mukesh Ambani, and the rest of their group were cleared immediately, Mr Khan was stopped and was given immigration clearance only after about two hours.

India has reacted strongly to the incident. Foreign Minister SM Krishna has asked Indian Ambassador to the US, Nirupama Rao, to take up the issue with US authorities. "This has become a habit of detention and then apology, this cannot continue. We need an assurance that this won't happen again" Mr Krishna said.

According to reports, while everyone else was cleared by the immigration department, the actor was made to wait. Intervention by consulate finally helped, sources added.

"If you stop someone because of his/her name or some other reasons for so 2-3 hours and then apologise and let him go, this is not fair. They should have records, anyone who has gone through this procedure once, should not go through it again. And for known figures, a data bank should be maintained. This has been done with Dr Kalam as well, it's sad. I got to know that everyone knew Shah Rukh there and then acted like this, it's completely uncalled for. The Foreign Minister has already condemned it," Congress leader Rajiv Shukla said.

Immediately after the incident, the US Customs and Border Protection addressed letter to India's New York Mission expressing "profound" apologies for the incident.

Back home, Jammu and Kashmir Chief Minister Omar Abdullah reacted on Twitter, saying: "Honestly what's the big deal?? This airport detention thing happens all the time & to all sorts of people. Get over it." (Buzz on Twitter)

Mr Khan, who has been named a Chubb Fellow, was accompanied by Nita Ambani and they were understood to have arrived in a private plane at the New York's White Plain airport. Mrs Ambani's daughter is a student at Yale University.

Mr Khan's plane landed in New York at 12:30 pm but he didn't make it to Yale till 6 pm, two hours late for his scheduled speech.

When he finally did address the students at Yale, which is three hours from New York, Mr Khan said: "We were detained at the airport as always. For one and a half hours. It was nice. It always happens when I come to America. Whenever I start feeling too arrogant about myself I take a trip to America."

"Mr Khan was very very upset at the episode. Yale University officials had to contact the Department of Homeland Security and the Immigration and Customs Department at Washington, when they came to know about his detention," sources said.

Promoted
Listen to the latest songs, only on JioSaavn.com
This is not the first time Mr Khan has been stopped at an American airport. In 2009 also, he was stopped at the Newark airport and was released after a two hour grilling.

Shailja Gupta, who is the USA head of Mr Khan's production house Red Chillies Entertainment, said that he was expecting to be stopped this time as well and that he answered all questions with grace and patience. She also said that the airport officials recognised him but continued with the questioning.