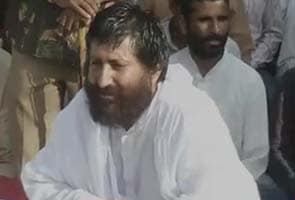 Asaram Bapu's son Narayan Sai, who has been evading the police in a rape case

Surat, Gujarat: Spiritual guru Asaram Bapu's son Narayan Sai, who has been evading the Gujarat police ever since he was booked for rape 10 days ago, is facing deeper trouble. The police have decided to seek a non-bailable arrest warrant against him.

This comes on a day the Surat police told a court that Narayan Sai may have faked his signature on his affidavit for anticipatory bail in the alleged rape of two Surat-based sisters.

The sisters have accused the 75-year-old guru and his son of assaulting them repeatedly at their ashrams.

Asaram is in Ahmedabad, where he was brought on Monday on a transit remand from a Jodhpur jail where he has been lodged since September, on charges of sexually assaulting a schoolgirl.

His son, 41, has been missing despite police summons and an alert for him in airports. The court may decide on his plea for anticipatory bail tomorrow.

The police have raided Narayan Sai's suspected hideouts in Delhi, Madhya Pradesh, Bihar and Gujarat but without much success.

In brazen defiance of law, Narayan Sai even issued ads in newspapers denying the rape charges or that he was hiding.

The two sisters say they came forward with their complaint encouraged by the 15-year-old girl who went to the police accusing Asaram Bapu of sexually assaulting her in his ashram near Jodhpur in August.