Nitish Kumar's critics seized the ads, calling them a sign of discord with PM (File)

They are fighting the Bihar election together, but on posters and ads put out by Chief Minister Nitish Kumar and the BJP, their alliance is in the small print.

The BJP's posters featuring a solo image of Prime Minister Narendra Modi have provoked opposition jibes at the ruling National Democratic Alliance (NDA). Similarly, Nitish Kumar's ads in newspapers do not mention either PM Modi or the BJP.

Full-page BJP ads and posters that appeared on Saturday said: "BJP hai toh bharosa hai (where there is BJP, there is trust)." With single billing to PM Modi, the ad only talked about the BJP's election promises - free Covid vaccine for all in Bihar and 19 lakh job opportunities. 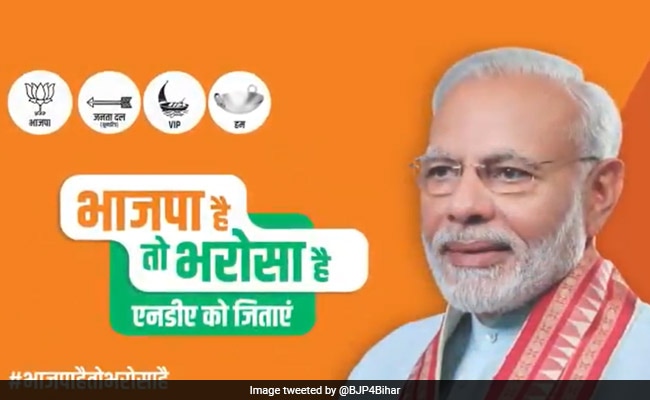 Political rivals like Chirag Paswan and Tejashwi Yadav's Rashtriya Janata Dal (RJD) called it proof that even the BJP acknowledged how unpopular Nitish Kumar has become and that the ruling party had taken a conscious decision to drop him from its ads.

"It seems Nitish Kumar's need for proof does not end," sneered Chirag Paswan, who is contesting separately from the NDA and has vowed to defeat Nitish Kumar even though he remains loyal to the BJP. The Lok Janshakti Party (LJP) also tweeted an image of the ad and taunted: "Nitish-ji should be grateful to the BJP for providing him a full-page ad and praman patra and he should be as loyal to the NDA coalition as the BJP is."

The RJD tweeted images of the same ad with the comment: "Bihar will vote for a Chief Minister not a Prime Minister."

Sources in the BJP point out that Nitish Kumar was the first to decide not to share space with its leaders in his ads. An advertisement released on the day he was sharing the dais with PM Modi did not have any image but his own, they say. 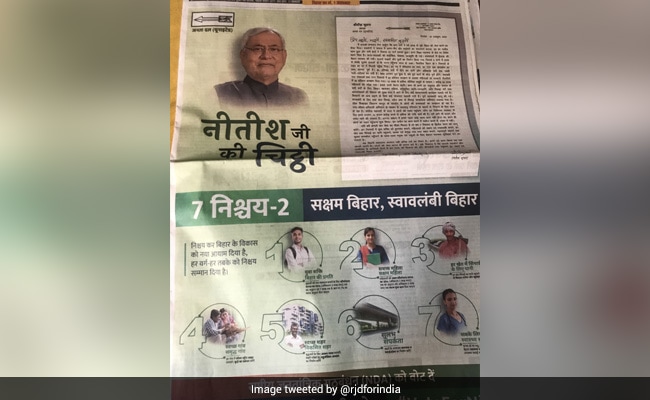 The ad showcased the Chief Minister and his "Saat Nishchay (seven resolves)" and used the catchphrase "Swavalambi Bihar" – his take on the Prime Minister's "Atmanirbhar (self-reliant) Bharat".

Nitish Kumar's critics seized the ads, calling them a sign of discord between the Chief Minister and PM Modi.

Interestingly, in 2010, when during a BJP national executive in Patna, an ad featuring him with Narendra Modi surfaced in Gujarat, a furious Nitish Kumar had lodged an FIR and sent a team to investigate. The image was from their joint rally in the 2009 parliamentary election. In the years after that, Nitish Kumar distanced himself from PM Modi and even ended his ties with the BJP in 2013, months before the 2014 national election. Nitish Kumar returned to the NDA only three years later, after dumping the RJD and Congress, and made public declarations in support of PM Modi.