Computer Baba, and six of his aides, are currently in jail after they were arrested in preventive action on Sunday. 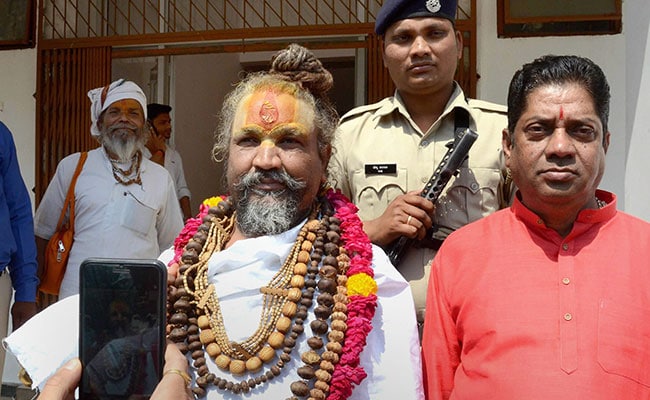 A fresh case has been registered against self-styled godman Namdeo Das Tyagi, for allegedly manhandling a panchayat staffer before the demolition of alleged illegal construction at his ashram near Indore, the police said on Friday.

Tyagi (54), popularly known as Computer Baba, and six of his associates, are currently in jail after they were arrested in preventive action when the administration was removing encroachment from government land at a village near Indore on Sunday.

The godman has been charged in a fresh case and formally rearrested while he was already in prison, following a complaint from the secretary of a village panchayat under Gandhinagar police station area, additional superintendent of police Prashant Choubey said.

The complaint stated that Tyagi and his associates had allegedly abused, manhandled and ill-treated a panchayat staffer, who had gone to free a government land from his possession on Sunday, the official said.

The case was registered under relevant sections of the India Penal Code on Thursday, Mr Choubey said.

Tyagi enjoyed the status of a Minister of State in the previous Congress government in Madhya Pradesh, and was appointed as the chairman of a river conservation trust.

The authorities have claimed that they have freed 40,000 square feet of land worth Rs 13 crore from alleged encroachment by Tyagi.

Tyagi had allegedly illegally occupied the temple premises and constructed five rooms, it was stated.

Apart from this, illegal construction on 20,000 square feet of land adjacent to a temple in the city's super corridor area has been demolished.