The image covers "part of the lunar farside in the northern hemisphere, covering a few prominent crates," ISRO said in an official release. 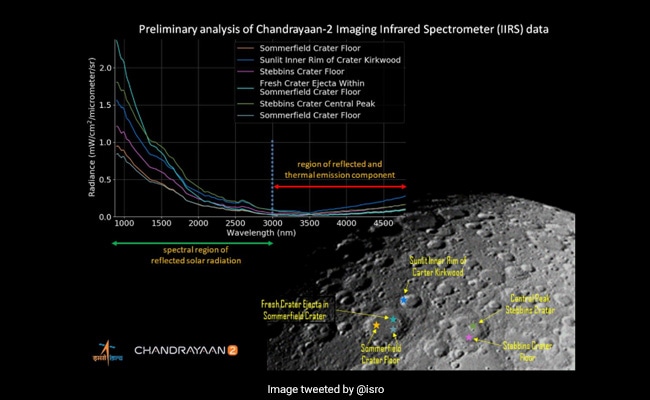 The image also underlines some of the prominent craters on the lunar surface.

The Indian Space Research Organisation has released first illuminated images of the lunar surface, acquired by the Imaging Infrared Spectrometer payload, onboard the Chandrayaan-2, that is circling the Moon. The image covers "part of the lunar farside in the northern hemisphere, covering a few prominent crates," ISRO said in an official release.

#ISRO
See the first illuminated image of the lunar surface acquired by #Chandrayaan2's IIRS payload. IIRS is designed to measure reflected sunlight from the lunar surface in narrow and contiguous spectral channels.

Chandrayaan-2's Vikram lander has been lying on the lunar surface since India attempted to soft-land it on the Moon last month, but failed. While the space agency continues its efforts in trying to establish contact with the lander, NASA had, earlier this month, confirmed that Vikram had a "hard landing" and that they have been unsuccessful in determining its location. NASA had also released pictures of the targeted landing site.

"It uses a grating to split and disperse the reflected sunlight (and emitted component) into different spectral bands. The major objective of IIRS is to understand the origin and evolution of the Moon in a geologic context by mapping the lunar surface mineral and volatile composition using signatures in the reflected solar spectrum," the statement said.

The image also underlines some of the prominent craters or bowl-shaped depressions present including Sommerfield, Stebbins and Kirkwood. "Preliminary analysis suggests that IIRS could successfully measure the variations in the reflected solar radiation that bounces off the lunar surface from different kinds of surface types," ISRO said adding that further detailed analysis that follows, is expected to "yield important results on the heterogeneity of lunar surface composition."

Lunar lander Vikram, one of three components of the Chandrayaan-2 spacecraft, had been scheduled to soft land on the moon at 1.55 am on September 6 but stopped transmitting 2.1 km from the surface.

India had expected to make space history with the Rs. 1,000-crore Chandrayaan-2 mission by being the first country to land near the South Pole of the Moon.

In a statement to national broadcaster Doordarshan, ISRO chief K Sivan had blamed faulty execution of the last stage of the operation for the loss of communication.