Section 377 Was Being Used As "Weapon Of Discrimination": Chief Justice

Section 377: Chief Justice of India Dipak Misra said the law violated the right to equality enshrined in the constitution 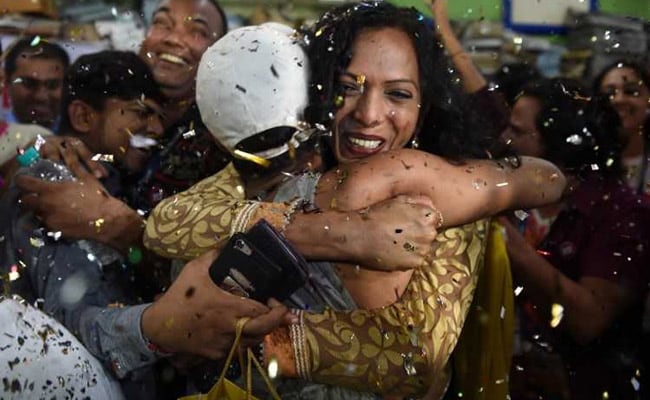 Section 377: The Supreme Court has legalised homosexuality in India

India's top court has legalized gay sex in the world's second-most populous country in a landmark decision that partially struck down a 158-year-old colonial-era law.

After a decades-long legal battle, a five-judge bench of the Supreme Court of India has diluted Section 377 of the Indian Penal Code, which was first enacted in 1860 and ranks gay sex alongside bestiality as a crime "against the order of nature."

Reading out the judgment in a packed courtroom on Thursday, Chief Justice of India Dipak Misra said the law violated the right to equality enshrined in the constitution and was being used as a 'weapon of discrimination'.

The Supreme Court's decision will have a wide-ranging economic and social impact on lesbian, gay, bisexual and transgender citizens across the country of 1.3 billion people. The ruling will prevent discrimination of gay employees and their partners in India, where activists say members of the LGBTQ community are singled out and blackmailed.

"This is a victory for individual liberty in India that is long overdue," said Milan Vaishnav, director of the South Asia program at the Carnegie Endowment for International Peace in Washington, D.C.

The move to overturn a law implemented by the British before India's independence in 1947 comes after a Hong Kong court in July allowed giving visas to spouses of gay expatriate workers in Asia's main financial hub. The move has put pressure on other Asian capitals to make themselves more attractive in the race for global talent. Australia legalized same-sex marriage late last year.

Although the ruling will not permit same-sex marriage, it is a step towards greater equality and brings India closer to other jurisdictions across Asia, which are liberalizing laws to make their economies open, welcoming and more inclusive.

The judgment is result of decades of back-and-forth rulings in lower courts and legal challenges from activists, social groups and various individuals. A lower court in India previously decriminalized homosexuality by declaring that Section 377 was unconstitutional in 2009. That ruling was overturned by a two-judge panel at the Supreme Court in 2013, which said a change in the law could only come from India's parliament.

But last year, activists got an unexpected boost when a rare ruling by a nine-judge bench upheld citizens' right to privacy and also recognized sexual orientation as an essential attribute of an individual's privacy and dignity.

Section 377 of the Indian Penal Code, drafted by British rulers in 1860, outlaws "carnal intercourse against the order of nature, with any man, woman or animal." While offenders face prison sentence and a fine, prosecutions are rare.

The petitioners behind the current case include the Naz Foundation -- a non-government organization working on HIV and sexual-health issues -- and Keshav Suri, the executive director of The Lalit Suri Hospitality Group.

"It's historic," Anand Grover, a lawyer for the Naz Foundation, said after the verdict was delivered. "It will change the way we see the society, polity and human rights of India."

But it was a lonely battle. The federal government led by Prime Minister Narendra Modi had declined to take a position on the issue and left it entirely up to the country's top court. Around the time the hearing began, Subramanian Swamy, an outspoken upper house lawmaker from the ruling Bharatiya Janata Party, described homosexuality as something that cannot be celebrated because it is contrary to the Hindu religion.

"The court's ruling is also an indictment of India's political class," Vaishnav said. "While politicians of all stripes will undoubtedly take credit, the truth is that they have lacked the courage to tackle existing constraints on personal freedoms head on."

The ruling, in some ways, represents the emergence of a newer, younger and more modern India that is increasingly connected to global ideas including liberal notions of citizenship and rights, said professor Craig Jeffrey, director of the University of Melbourne's Australia India Institute.

"There has been a social revolution in India since the 1990s," Jeffrey said. "This new generation is increasingly acting on society in novel ways, campaigning around issues as diverse as marine pollution and sexual health."