Schools, Shops Shut In Few States Due To Protests Against SC/ST Act

Some organisation had called the one-day bandh to protest against the amendment last month to the Scheduled Castes and Scheduled Tribes (Prevention of Atrocities) Act. 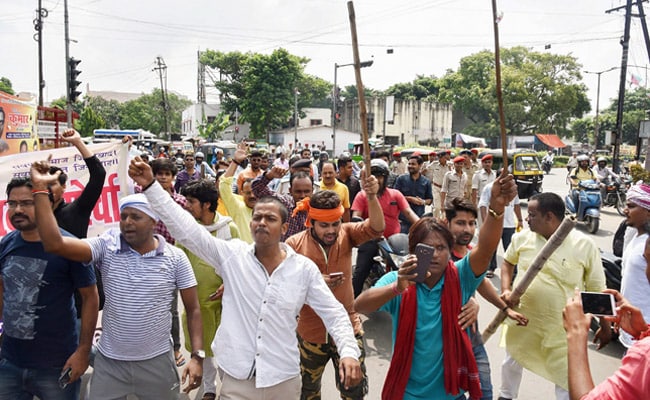 Supporters also blocked traffic in towns and on the national highway. (PTI)

Protesters stopped trains and blocked highways in Bihar and Uttar Pradesh and shopkeepers downed shutters in some other northern states during a Bharat Bandh Thursday against the recent amendment to the SC/ST Act.

Shops, schools and other commercial establishments were closed in parts of Bihar, Rajasthan, Madhya Pradesh, Uttar Pradesh and Punjab but the shutdown call by anti-reservation bodies had little impact elsewhere in the country.

There were scattered incidents of violence in Bihar, Uttar Pradesh and Madhya Pradesh.

Some organisation had called the one-day bandh to protest against the amendment last month to the Scheduled Castes and Scheduled Tribes (Prevention of Atrocities) Act.

The amendment bill passed by Parliament had overturned the Supreme Court order which barred arrests without a preliminary inquiry.

Commercial establishments remained closed in many parts of Bihar, particularly in capital Patna. But banks and government offices functioned normally.

Protesters gathered before the Bihar BJP headquarters in Patna, raising slogans over the "betrayal" by the party. Some of them also headed towards the office of the Janata Dal (United), a BJP ally.

The shutdown had a strong impact in Muzaffarpur, where bandh supporters blocked traffic in the town and on the national highway.

They also burnt tyres at many places and clashed with policemen who tried to stop them.

Cases of arson were also reported from Biharsharif town. Traffic was disrupted in Begusarai.

Protesters briefly stopped a train in Kanpur and the Varanasi highway was blocked for three hours at Gorakhpur, officials said.

In Etah, protesters gheraod the house of Jalesar MLA Sanjiv Diwakar who had to call in the police.

But officials said apart from such scattered incidents of violence, the state remained by and large peaceful.

The bandh call evoked a strong response in Rajasthan where many shops and businesses, schools and other educational institutions remained closed on Thursday.

Shops were shut in Jaipur, Karauli, Pratapgarh, Udaipur, Pali, Nagaur and other districts in the state.

The police detained at least three leaders of the Samta Andolan Samiti, which is against caste-based reservation, as a precautionary measure.

In Madhya Pradesh, there were scattered incidents of stone-pelting. Police lobbed teargas shells at Aron in Guna district to disperse protesters.

"In Rewa, Satna and Chhatarpur districts, thousands of protesters took to the streets. In Shadora area of Ashok Nagar district, some protesters squatted on the railway tracks, while in Rewa they tried to stop a train," a police official said.

People set tyres on fire at some places in Rewa and Satna districts.

In rural Ujjain, members of the Dalit community and the upper castes came face to face, the official said.

Some people tried to storm into Rewa district police control room, but the attempt was thwarted.

Most private schools and petrol pumps remained closed in Madhya Pradesh. Markets and business establishments in parts of the state were also shut.

Brahma Samagam Sawarna Jankalyan Sangathan's national president Dharmendra Sharma said about 150 organisations of the upper castes and Other Backward Classes participated in the bandh in the state.

He claimed the bandh was effective in almost the entire state, particularly in the major towns of Katni, Vidisha, Sehore, Dewas, Indore, Gwalior, Jhabua, Chhattarpur, Mandsaur, Sagar and Ujjain.

In Punjab and Haryana, there was little response to the bandh with people keeping their businesses open in most areas, reports said. But in Punjab's Phagwara, shops and commercial establishments remained shut.

Madhya Pradesh Chief Minister Shivraj Singh Chouhan appealed to the people, saying, "Madhya Pradesh is an island of peace. I pray that we all progress and no one should try to disrupt the peace in the state."

In Uttar Pradesh, Chief Minister Yogi Adityanath said, "People have their feelings. In a democracy everyone has the right to express themselves."

"The law is to protect the downtrodden. The government will ensure that it will not be misused," Adityanath told reporters in Gonda.

Earlier this year, the apex court had removed the strict provision of mandatory arrests under the SC/ST Act.

But the decision had triggered nationwide protests by Scheduled Caste organisations, forcing the Centre to bring an amendment to the Act to overrule the SC order.