The ED, in its prosecution complaint, attached replies sent to it by Bhumi Pednekar, Sara Ali Khan and Janhvi Kapoor, who were similarly approached by 'conman' Sukesh Chandrasekhar allegedly through Irani. 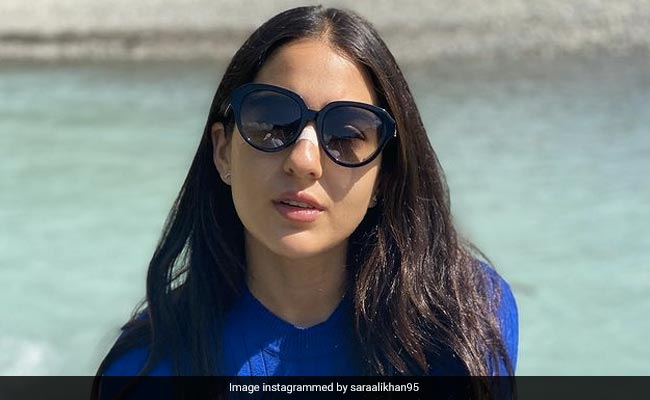 Sara Ali Khan told the ED that someone named Reddy contacted her and wanted to gift her a car. (File)

An alleged associate of jailed 'conman' Sukesh Chandrasekhar "projected" him as a business tycoon so that he could get in touch with various female models and actors and she even took some of them to meet him inside the Tihar jail in 2018, the Enforcement Directorate (ED) has said in a recently filed charge sheet.

Pinky Irani alias Angel, 53, was arrested in this case by the agency in December last year. She was recently granted bail by a Delhi court.

She has been accused by the Enforcement Directorate of indulging in money laundering and allegedly helping Chandrasekhar in getting in touch with actor Jacqueline Fernandez and sending her expensive gifts on his behalf.

Ms Fernandez has been questioned multiple times in this case. Dancer-actor Nora Fatehi has also recorded her statement with the ED in the past.

A supplementary charge sheet, detailing the role of Mumbai-based Irani in the money laundering case against 32-year-old Chandrasekhar and others, was filed by the ED early this month before a court in New Delhi.

The agency, in this prosecution complaint, has attached replies sent to it by Bollywood actors Bhumi Pednekar, Sara Ali Khan and Janhvi Kapoor, who were similarly approached by Chandrasekhar allegedly through Irani.

Chandrasekhar and his wife Leena Maria Paul are being probed by the Delhi Police as well as the ED for allegedly cheating and extorting money from some rich people, including individuals like former Fortis Healthcare promoter Shivinder Mohan Singh's wife Aditi Singh.

Investigation by the agencies found that Chandrasekhar, while he was lodged in Delhi's Rohini jail, allegedly ran an extortion racket using phone spoofing technology. He was later shifted to the Tihar jail.

The ED is tracking the beneficiaries of this allegedly extorted money and the entire funds trail. So far, the agency has not called these actors or models as accused as they could be witnesses in identifying the proceeds of crime.

In this pursuit, the agency recorded the statements of some young models whose links it got after questioning Pinky Irani.

At least three out of the four models told the ED that they were "introduced" to Chandrasekhar by Pinky Irani and they even met him unrestricted at the Tihar jail in 2018 along with her.

"Pinky Irani was a close confidant and advisor of Chandrasekhar. Not only did she create a facade of being a businessman for Chandrasekhar, she also allowed him to project himself as a man of means and a free man by ensuring that he could deliver what he wanted," the ED claimed.

According to the charge sheet, Bhumi Pednekar submitted her reply to the agency early this year stating that Pinky Irani messaged her saying she was the "vice president (of) HR News Express Post and informed her that their group chairman (Chandrasekhar) is a fan of hers and wanted to speak with her about a huge project and also wanted to gift her a car."

The 32-year-old actor told the agency that "she did not receive any gifts from Chandrasekhar or his associates, including Pinky Irani, nor has she ever met or had any sort of personal interaction, either social or professional, with them."

Sara Ali Khan told the ED that she did not know anyone by the name of Sukesh Chandrasekhar or Shekhar but someone in the name of "Mr. Suraj Reddy did WhatsApp her on 21.05.2021 saying he would like to gift her a car as a family gesture and mentioned that his CEO Mrs Irani had tried to contact her."

Ms Khan, 26, said the Reddy person continued to insist on giving her gifts and she constantly refused the same.

"However, after many attempts of refusing him, she did agree on receiving a box of chocolates from him and thereafter he sent a Franck Muller watch along with the chocolates," the ED said.

Janhvi Kapoor told the ED that while she was not approached by Chandrasekhar or Pinky Irani, she was contacted by a lady who identified herself as Leena from a company called Nail Artistry regarding being a celebrity guest at the launch of a salon in Bengaluru.

She wrote to the agency saying she inaugurated the salon in July last year and received a branded luxury bag and a professional fee of Rs 18.94 lakh in her bank account. She sent a statement of the transaction to the ED.

Nail Artistry is stated to be the business enterprise of Leena Maria Paul.

"She took some of them to Tihar Jail to meet Sukesh Chandrasekhar and she impersonated as Alka Kumar, P Kumar, Angel K, CFO of Jaya TV/Sun TV and CFO of News Express Post for contacting these models/actresses," the ED alleged in the charge sheet.

The same modus operandi was used by Irani and Chandrasekhar to approach Jacqueline Fernandez through her makeup artist S Muthathil, it said.

The ED has arrested Chandrasekhar, Paul, Pinky Irani, two other co-accused, Pradeep Ramnani and Deepak Ramnani in this case.

In August last year, it had raided some of Chandrasekhar's premises and seized a sea-facing bungalow in Chennai, Rs 82.5 lakh in cash and over a dozen luxury cars.

In a statement, it had claimed that Chandrasekhar is a "known conman" and is being probed by the Delhi Police in a case of alleged criminal conspiracy, cheating and extortion to the tune of about Rs 200 crore.

"Chandrasekhar is the mastermind of this fraud. He has been part of the crime world since the age of 17. He has multiple FIRs against him...," the ED had said.

Despite being in the jail, it said, Chandrasekhar "did not stop conning" people.

"He (using a cell phone procured illegally in prison) with the help of technology made spoofed calls to dupe people as the numbers displayed on the called party's phone number belonged to senior government officers.

"While speaking (from prison) to these persons, he claimed to be a government officer offering to help people for a price," the ED had claimed.