With their garlic protest, Congress accused the BJP government in Madhya Pradesh of being apathetic towards farmers. 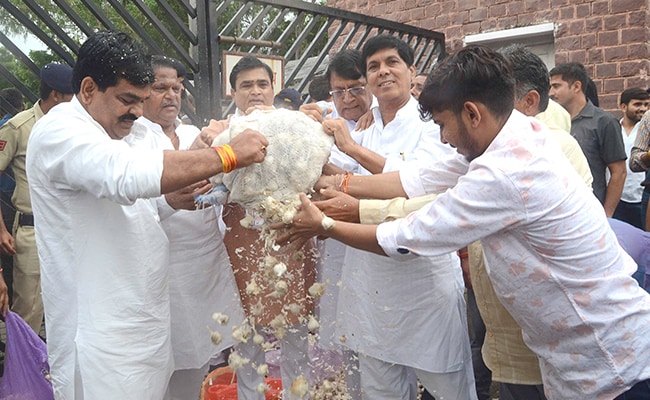 Congress alleged the BJP government did not have money to buy the garlic cultivated by the farmers.

Congress legislators dumped loads of garlic at a gate of the Madhya Pradesh Assembly on Tuesday, accusing the state BJP government of being apathetic towards farmers who were not getting adequate prices for their crops.

Some videos surfaced in the last few days on social media showing farmers throwing sacks full of garlic into different water bodies in Madhya Pradesh, apparently after getting low prices for their produce. One of the farmers had claimed they were being offered just Re 1 per kg for their garlic produce.

Expressing solidarity with the farmers, Congress MLAs Sachin Yadav, Jitu Patwari, and others threw garlic in front of gate number 3 of the Madhya Pradesh Assembly, where the five-day monsoon session began on Tuesday.

The opposition legislators raised slogans, alleging the ruling BJP "bought" legislators but was apathetic towards farmers and did not have money to buy the garlic cultivated by them.

Two years ago, 22 MP Congress MLAs had resigned, which led to the fall of the Kamal Nath-led Congress government in Madhya Pradesh.

The BJP later came to power in the state under the leadership of Chief Minister Shivraj Singh Chouhan.

Recently, a number of videos emerged in which farmers were seen dumping garlic into various water bodies in the state.

One such farmer, Vikas Sisodia, had claimed he was getting just Re 1 per kg for his garlic crop in the Indore market, and hence, he considered it appropriate to dump the produce in a drain near his village.

Mr Sisodia had claimed he suffered a loss of Rs 3 lakh in cultivating garlic this year.