The judge has directed the activist not to enter Pamba, an important pilgrim spot enroute to the hill shrine of Lord Ayyappa at Sabarimala. 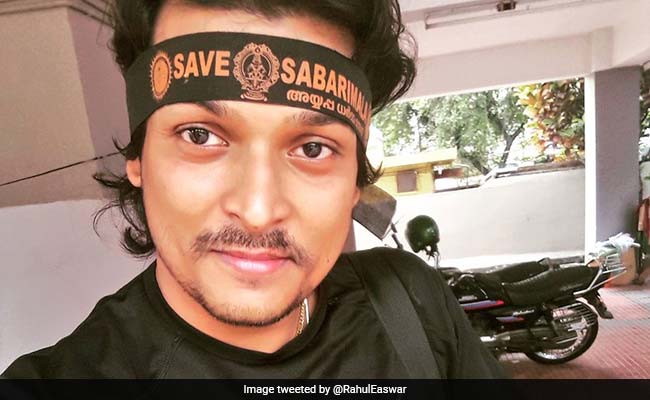 The Kerala High Court today granted bail to Ayyappa Dharma Sena leader Rahul Easwar, who was arrested earlier this week for defying the bail conditions imposed in a case related to violent protests at Sabarimala in October.

Granting the fresh conditional bail, Justice Sunil Thomas directed the activist not to enter Pamba, an important pilgrim spot enroute to the hill shrine of Lord Ayyappa at Sabarimala.

The judge also directed him to sign at Pathanamthitta police station once every month.

Mr Easwar was arrested from a rest house in Palakad on Monday, two days after the court at Ranni in Pathanamthitta district ordered his arrest for failure to appear before the local police as stipulated in the bail condition.

The Ayyappa Dharma Sena leader spearheaded protests against the implementation of the Supreme Court verdict permitting women of all age groups into the Lord Ayyappa temple.

He was earlier arrested in the case relating to violence at the Lord Ayyappa shrine when it was opened for monthly prayers on October 17, for the first time after the top court lifted the ban on women in the age group of 10 and 50 visiting the shrine.

The local court, while granting bail earlier, had stipulated several conditions, including that he has to appear in the Pathanamthitta police station every Saturday. However, on December 8, he failed to appear, following which the court had cancelled Mr Easwar's bail.