S Jaishankar also took up the issue of Indian students impacted by COVID measures in New Zealand and urged expeditious visa processing of those desirous of studying in New Zealand now. 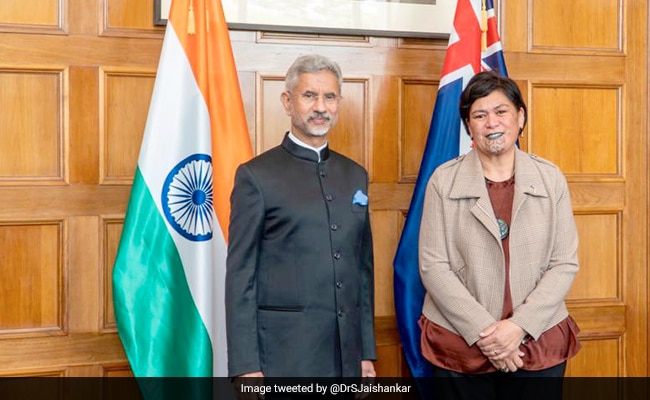 S Jaishankar is on his first visit to New Zealand as External Affairs Minister.

External Affairs Minister S Jaishankar on Thursday held "warm and productive" talks with his New Zealand counterpart Nanaia Mahuta during which the two leaders exchanged views on issues of international concerns such as the Indo-Pacific and the Ukraine conflict.

It is Mr Jaishankar's first visit to New Zealand as External Affairs Minister.

"Warm and productive talks with New Zealand Foreign Minister @NanaiaMahuta this afternoon. Two societies, respectful of tradition and culture, are seeking to forge a more contemporary relationship," Mr Jaishankar tweeted after the meeting.

Two societies, respectful of tradition and culture are seeking to forge a more contemporary relationship. pic.twitter.com/8xdZLunxHF

"Appreciated the exchange of views on (issues of) international concerns such as the Indo-Pacific and the Ukraine conflict. Value our working together in multilateral forums including the UN and Commonwealth," he said.

India, the US, and several other world powers have been talking about the need to ensure a free, open and thriving Indo-Pacific in the backdrop of China's rising military manoeuvring in the resource-rich region.

India has repeatedly emphasised on the immediate cessation of hostilities in Ukraine and the need to resolve the ongoing conflict through dialogue and diplomacy.

Mr Jaishankar also took up the issue of Indian students impacted by COVID measures in New Zealand and urged expeditious visa processing of those desirous of studying in New Zealand now.

He also met Associate Minister for foreign affairs Aupito William Sio during his meeting with Mahuta.

"Pleasure to meet Associate Minister for foreign affairs @AupitoWSio_MP during my talks with FM @NanaiaMahuta Benefitted from his insights on Pacific Islands," Mr Jaishankar tweeted.

On Wednesday, Mr Jaishankar met Indian-origin minister Priyanca Radhakrishnan, and also had an interactive session with prominent personalities of the country.

“Good to meet Minister @priyancanzlp today in Auckland. Thank her for an interactive session with prominent personalities of New Zealand. Committed to furthering our relationship,” he tweeted.

She is the first person of Indian origin to become a minister in New Zealand.

During the visit, Mr Jaishankar will join Prime Minister Jacinda Ardern on Thursday to felicitate members of the Indian community. for their exceptional achievements and contributions.

A book showcasing Prime Minister Narendra Modi's special bond with the Sikh community 'Heartfelt - The Legacy of Faith' will also be released on the occasion.

Further, he will interact with parliamentarians, members of the business community as well as Indian expatriates, including students.

In Wellington, Mr Jaishankar will inaugurate the newly constructed building of the High Commission of India.

Mr Jaishankar is on a week-long visit to New Zealand and Australia.

In Australia, the External Affairs Minister will visit Canberra and Sydney.