Jaishankar and Jugalji Thakore had defeated Congress candidates Pandya and Chudasama respectively in the bypolls. 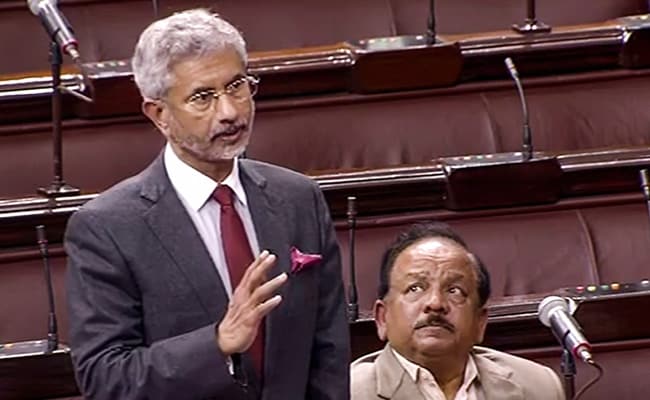 Both S Jaishankar and Jugalji Thakore were elected to Rajya Sabha on July 5 last year.

External Affairs Minister S Jaishankar has filed a caveat in the Supreme Court seeking to be heard before the court passes any order on a plea by a Congress leader against his election last year to the Rajya Sabha.

The caveat has been filed through advocate Swarupama Chaturvedi on behalf of S Jaishankar seeking to be heard before the court decides any plea filed against the Gujarat High Court's February 4 order.

The high court had dismissed the plea of Congress leader Gaurav Pandya, who had challenged S Jaishankar's election to the Rajya Sabha.

It had also dismissed two others petitions filed by Congress leaders Chandrika Chudasama and Paresh Dhanani against the election of BJP candidate Jugalji Thakore.

Both S Jaishankar and Jugalji Thakore were elected to Rajya Sabha on July 5 last year in bypolls held on seats vacated by Union ministers Amit Shah and Smriti Irani.

S Jaishankar and Jugalji Thakore had defeated Congress candidates Pandya and Chudasama respectively in the bypolls.

The Congress leaders had moved the high court, challenging the election on the ground that the Election Commission's notifications, treating the two vacant seats to be of different categories and requiring by-polls to be held separately, were "illegal and in violation of provisions of the Constitution, the Representation of People (RP) Act, 1951 and the Conduct of Election Rules, 1961".

The high court had dismissed the petitions saying the petitioners failed to disclose the cause of action under the provisions of the RP Act relating to the grounds for declaring an election void.

It had also said the petitioners failed to point out any provision of the Constitution or the RP Act requiring the EC to hold a single by-election for filling up all casual vacancies.

"The non-compliance of provisions of the Constitution or provisions of the said (RP) Act constituting the cause of action has to be specifically pleaded, and the interpretation of the petitioner of a particular provision of Constitution or of the Act in a particular manner cannot be termed as the noncompliance of such provision for the purpose of challenging the election," the high court had said.

S Jaishankar and Jugalji Thakore had contended before the high court that the EC broke no rules by holding separate elections for two seats and it has been a consistent practice by the poll panel since 2009 to issue separate notifications for holding by-polls for casual vacancies in the Rajya Sabha.