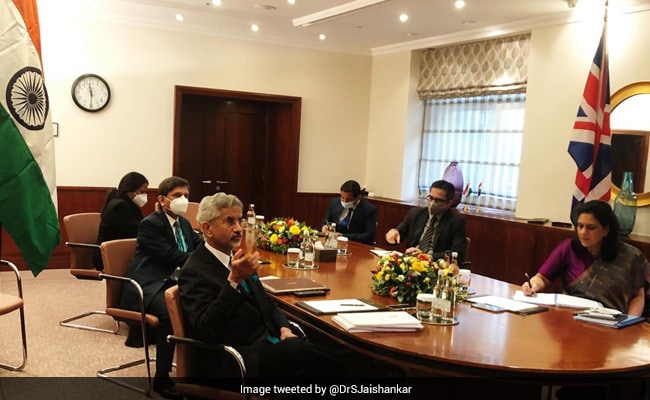 External Affairs Minister S Jaishankar on Thursday held bilateral discussions with his UK counterpart, Dominic Raab, which focussed on both sides implementing an ambitious '2030 Roadmap' of the India-UK Enhanced Trade Partnership (ETP) to pave the way for a Free Trade Agreement (FTA).

Mr Jaishankar, who conducted the talks virtually after he had withdrawn from face-to-face meetings in the wake of possible coronavirus exposure within the visiting Indian delegation, said he and Mr Raab also discussed Indo-Pacific cooperation and global health challenges in some detail.

Just concluded the bilateral Foreign Ministers' Meeting with British counterpart Dominic Raab. Focussed on our responsibility for implementing the 2030 Roadmap. Confident that we will see early progress on many fronts, Mr Jaishankar tweeted following his interaction via videolink.

Just concluded the bilateral Foreign Ministers' Meeting with British counterpart @DominicRaab. Focussed on our responsibility for implementing the 2030 Roadmap. Confident that we will see early progress on many fronts. pic.twitter.com/LvBxDNkDFn

Also explored our strategic convergences across regions. Discussed the Indo-Pacific, global health challenges and UN cooperation in some detail, he said.

The bilateral meeting follows a Virtual Summit between UK Prime Minister Boris Johnson and Prime Minister Narendra Modi on Tuesday, when the two leaders agreed the '2030 Roadmap' as part of an ETP with trade and investment deals worth around GBP 1 billion.

The ETP, signed between Commerce and Industry Minister Piyush Goyal and UK International Trade Secretary Liz Truss soon after, sets the goal for FTA talks to kick-start within months.

The Roadmap will pave the way for a deeper and stronger engagement over the next ten years in the key areas of people to people contacts, trade and economy, defence and security, climate action and health.

PM Modi and Mr Johnson launched the ETP to unleash the trade potential between the 5th and 6th largest economies of the world and by setting an ambitious target of more than doubling bilateral trade by 2030.

As part of the ETP, India and the UK agreed on a roadmap to negotiate a comprehensive and balanced FTA, including consideration of an Interim Trade Agreement for delivering early gains, the Ministry of External Affairs said in a statement on Tuesday.

The enhanced trade partnership between India and UK will generate several thousands of direct and indirect jobs in both the countries, it said.

Mr Jaishankar is in London at the invitation of Mr Raab as a guest at the G7 Foreign and Development Ministers Meeting, which concluded on Wednesday. The meeting is related to the UK's G7 Presidency goals ahead of the Leaders' Summit in Cornwall in June, to which Prime Minister Modi has been invited.