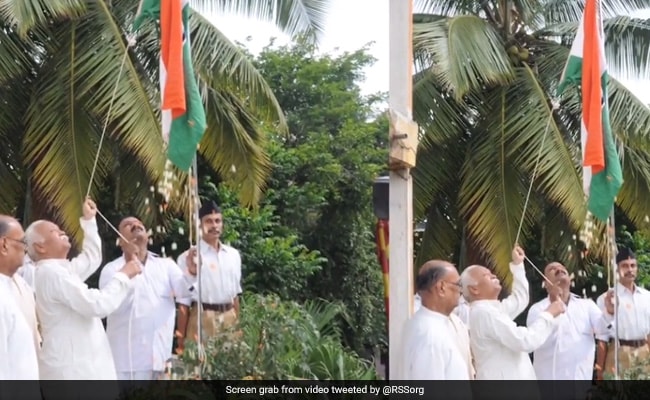 Rashtriya Swayamsevak Sangh (RSS) chief Mohan Bhagwat on Saturday hoisted the tricolour at the organization's headquarters in Nagpur as part of the 'Har Ghar Tiranga' campaign.

Nagpur district collector R Vimla visited the RSS headquarters during the day and presented Mr Bhagwat a national flag under the campaign, a Union government initiative to mark 75 years of Independence, an official said.

The Sangh headquarters in Mahal area also houses residential quarters of Mr Bhagwat and some other functionaries.

A day before, the Sangh also changed the display pictures (DPs) of its Facebook and Twitter accounts to the national flag.

Questions had been raised on social media earlier as to why the RSS, ideological parent of the ruling BJP, had not yet uploaded the tricolour as DP.

Prime Minister Narendra Modi has appealed to the citizens to upload images of the national flag as display pictures as part of 'Azadi Ka Amrit Mahotsav'.