The Rashtriya Swayamsevak Sangh (RSS) chief was speaking at the launch of a book, "RSS, a roadmap for the 21st century", authored by Sunil Ambekar, a top functionary of the Sangh's students' wing ABVP. 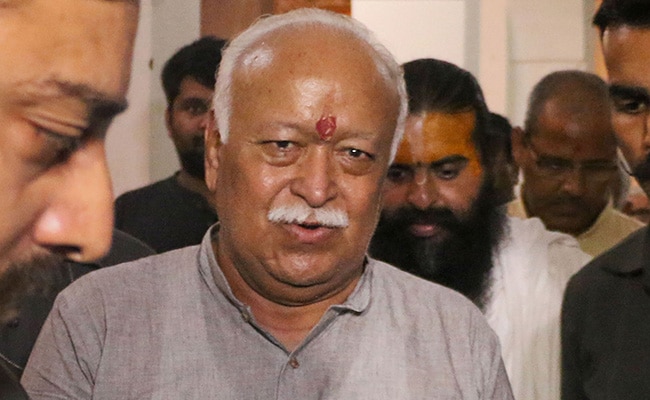 RSS chief Mohan Bhagwat said "India is a Hindu rashtra and it is non-negotiable".

RSS chief Mohan Bhagwat on Tuesday said the Sangh cannot be bracketed into any ideology, does not believe in any ism and is not represented by any book including one authored by its second head MS Golwalkar.

The Sangh's core value is that India is a Hindu rashtra and it is non-negotiable, he said.

"It is wrong to call or describe anything as Sangh's ideology. Sangh founder Dr Hedgewar did not ever say he can fully understand the Sangh. After having been the Sarsangachalak for so long, Guru ji said I may have begun to understand the Sangh," he said.

The Rashtriya Swayamsevak Sangh (RSS) chief was speaking at the launch of a book, "RSS, a roadmap for the 21st century", authored by Sunil Ambekar, a top functionary of the Sangh's students' wing ABVP.

He categorically said there is no RSS idealogue though some people might be appearing on different media platform in this capacity and said Lord Hanuman, Maratha king Shivaji and Hedgewar are "our role models".

Asserting that the Sangh cannot be bracketed into any ideology, Mr Bhagwat said, "RSS does not believe in ism" and "cannot be represented by any book including the Golwalkar's ''Bunch of Thoughts''".

He said "India is a Hindu rashtra and it is non-negotiable".

However, he added that Sangh considers as its own even those who do not call themselves Hindus but consider themselves Indians.

On homosexuality and the issues faced by transgender people without naming them, he said, "These people have a place in society. In Mahabharata, Jarasandha (king of Magadha) had two generals... they fought in the war alongside the others. We have also spoken about it; this is not such a big problem, we can find solutions. There is no practice of debate over everything."

Talking about Sangh's role in the society, Mr Bhagwat said the basic purpose is to change the person. It is not like the Sangh does everything, or the Sangh did everything.

"When this happens, it is the defeat of the Sangh. The Sangh wants the whole society to be organised."

Applauding the book, he said there are certain expressions and words used in the Sangh, which do not have an equivalent in foreign languages. So the book is a commendable effort in introducing the values of the Sangh and its vision and can be a ready reckoner for the volunteers, he added.