Congress Seva Dal chief Lalji Desai has defended the claim, calling it "historical fact" and saying it is "important to know reality of people presented as heroes by the BJP" 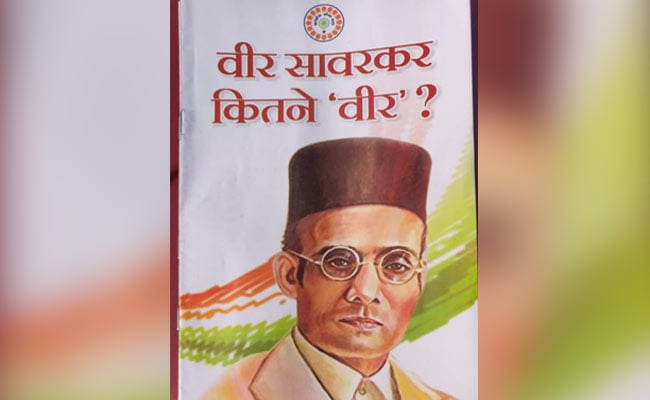 A booklet circulated by the Seva Dal, a grassroots organisation affiliated to the Congress, has caused controversy by claiming Mahatma Gandhi's assassin, Nathuram Godse, and VD Savarkar, late former leader of the Hindu Mahasabha, were in a "physical relationship". Distributed at a 10-day training camp in Bhopal, the booklet claims to be quoting from 'Freedom At Midnight', a book by Dominique Lapierre and Larry Collins that describes events around the independence struggle.

Seva Dal chief Lalji Desai has defended the claim, calling it "historical fact" and saying it is "important to know reality of people presented as heroes by the BJP".

"Writer has written on basis of evidence. That's not important... whether he was gay or not. In our country today, everyone has a legal right to have their own preferences," he told news agency ANI.

"(But) what has been mentioned is historical fact supported with proper references. It is important for the public to know the reality of the people who are presented as heroes by the BJP," he added.

The booklet also blames Savarkar for the partition of the country in 1947, something Congress leader Manish Tewari alluded to in parliament last month.

The booklet, which was accompanied by a second booklet on the RSS and the BJP, claims to quote from 'Freedom At Midnight' when it says: "Before Nathuram Godse adopted Bramhacharya, there is just one mention about his physical relationship. The only physical relation which Godse had before adopting Bramhacharya was homosexual relationship with his political guru Veer Savarkar".

BJP spokesperson Rajneesh Agrawal has lashed out at the Congress for defaming Savarkar.

"Congress wants to portray Savarkar as anti-Muslim... has followed Muslim appeasement policy. Savarkar was a patriot. This is nonsense. They are doing character assassination of patriots. Congress never liked freedom fighters," he said.

In the second booklet - RSS aur BJP, kuchh tathya aur jankari (The RSS and the BJP, some truths and facts) - the Congress Seva Dal has claimed the organisation (the RSS) "idolised" Adolf Hitler and Mussolini.

Mr Agrawal hit out at the Congress over the claim, stating that the RSS didn't need a certificate from a party he accused of distorting information. He also pointed out that the RSS came into existence in 1925, seven years after the end of World War I and 14 years before the start of World War II.