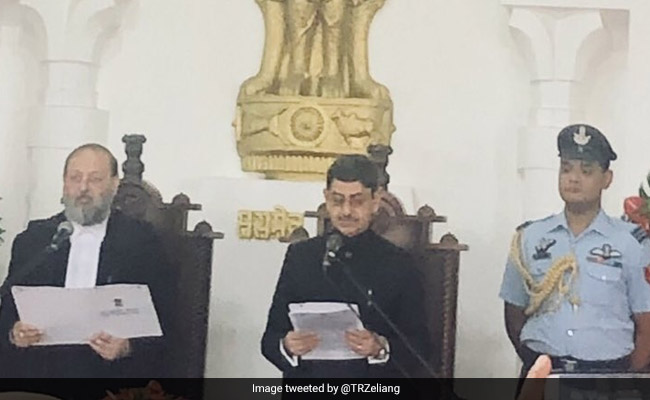 Former Deputy National Security Advisor RN Ravi, who is also the government's interlocutor for the ongoing talks with various Naga insurgent groups, on Thursday took charge as the Governor of Nagaland.

Chief Justice (Acting) of Gauhati High Court, Arup Kumar Goswami, administered the oath of office to Mr Ravi at a brief ceremony attended by Chief Minister Nephiu Rio and his cabinet ministers, Assembly Speaker Vikho-o Yhoshu, Leader of Opposition TR Zeliang and a host of legislators at the Raj Bhavan in Kohima.

Mr Rio said he was looking forward to working with RV Ravi.

RV Ravi, who had worked closely with National Security Advisor Ajit Doval during the latter's stint in the Intelligence Bureau, was appointed as Nagaland Governor on July 20 by President Ram Nath Kovind, replacing PB Acharya, whose tenure ended on July 19.

A 1976-batch Indian Police Service officer of the Kerala cadre, he will continue to be the interlocutor for peace talks with the National Socialist Council of Nagalim Isak-Muivah (NSCN-IM) besides other Naga rebel groups.

"Besides holding the post of Governor of Nagaland, he (Ravi) will continue to be government's interlocutor for the ongoing talks with various Naga insurgent groups for a final settlement," a Home Ministry official told news agency IANS.

Mr Ravi's achievements during his first two years as interlocutor include the signing of the Framework Agreement between the Indian government and the (NSCN-IM) on August 3, 2015.