River Patrols, Rs 5,000 Aid As Body Pile-Up By The Ganga Continues In UP

The police action in Ballia, and elsewhere, has come amid fresh reports of bodies found buried in the sandbanks of the Ganga River in two ghats in the state's Prayagraj town.

Police have stepped up patrolling in the rivers in Uttar Pradesh

After multiple reports of bodies of suspected COVID-19 patients being found by the Ganga River in parts of Uttar Pradesh all through last week, police units in different districts across the state have stepped up patrolling by the banks and on the river itself to prevent bodies from being thrown into the river or buried along it.

Visuals from eastern UP's Ballia district, where decomposed bodies were found floating in the river last week, showed police boats on the river carrying out patrolling. A separate police team was filmed making announcements asking people not to throw bodies into the river.

"There are police patrols taking place along the ghats so that no one can throw a body in the river. We are also going to villages and sensitising people not to do this. We have also organised river patrols from our five police stations that are by the Ganges River. There are a total of nine police teams that we have engaged," Vipin Tada, the superintendent of police in eastern UP's Ballia told reporters.

The police action in Ballia, and elsewhere, has come amid fresh reports of bodies found buried in the sandbanks of the Ganga River in two ghats in the state's Prayagraj town, home to the famous confluence of the Ganga and Yamuna rivers and among India's most revered pilgrimage sites. 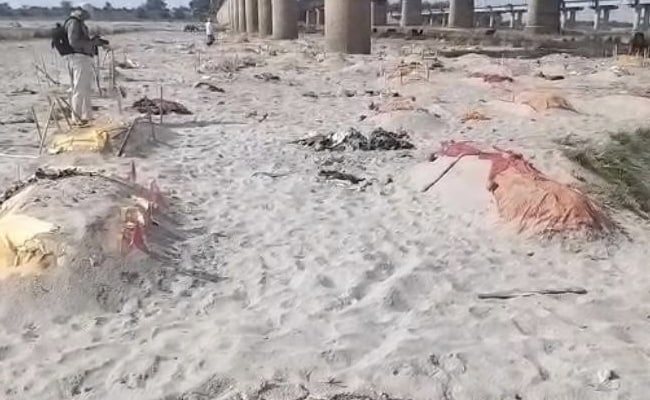 Bodies have been found buried in the sand by the Ganga River in Uttar Pradesh's Prayagraj.

Visuals taken by local journalists on Saturday and Sunday showed what appeared to be hundreds of graves on the two ghats, many of them covered with saffron cloth. Locals in the area told journalists the bodies were buried in the last month and more and it was not clear to them whether they were of covid patients or of people who died of other causes. Locals also told the media the burials were taking place because villages could not afford wood at inflated prices for last rites. The Prayagraj administration has not reacted to the visuals.

In full-page ads in all newspapers on Sunday, the UP government appealed to residents not to dump bodies in any water bodies including the Ganga and said Rs 5,000 would be given to anyone who could not afford to perform the last rites of their loved ones.

In a press release on Sunday, the central government said it had asked concerned officials in UP and Bihar "to give equal attention to such incidents in urban as well as rural areas along Ganga and other rivers". Stopping of dumping of dead bodies as well as their safe disposal and protection of water quality has to be attended to on war footing, the release said.