The protesters raised slogans against the state government and demanded action against the train driver. 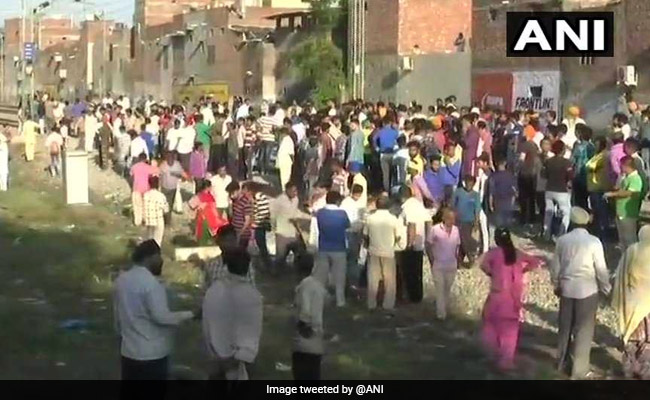 A day after a train mowed down over 60 people, a number of people staged a sit-in on railway tracks on Saturday, demanding action against the erring officials and train driver and seeking adequate compensation for the victims.

The protesters raised slogans against the state government and demanded action against the train driver.

One of the protesters alleged the train passed through the area at a high speed and that the driver did not slow down the train despite the presence of a large crowd.

Later, the police chased away the protesters when they tried to move towards residential areas from the railway tracks.

Police have barricaded the area to prevent the protesters from reassembling.

At least 61 people were killed and 72 injured on Friday evening after a crowd of Dussehra revellers that had spilled onto railway tracks while watching burning of Ravana effigy was run over by a train near here, officials said.

The train was coming from Jalandhar when the accident occurred at Joda Phatak near Amritsar, where at least 300 people were watching 'Ravana dahan' at a ground adjacent to the tracks.

"Why did the government not ensure proper security arrangements at the time of Dussehra festival? Why such function was allowed to take place near railway tracks?" Sujit Singh, one of protesters, said.

Another protester demanded that the victims be given adequate compensation.

Punjab Chief Minister Amarinder Singh on Friday announced immediate ex-gratia compensation of Rs 5 lakh each to the next of kin of those killed.

Some protesters blocked the GT Road near the train accident site. They also demanded government jobs for the kin of those killed.

A resident blamed Navjot Kaur Sidhu, the wife of Punjab minister Navjot Sidhu who represents the area in the assembly, for the tragedy.

"The tragic incident could have been averted, had Navjot Kaur Sidhu turned up at the venue on time and had the function not been delayed," said Deepak who works as a painter.

He said that every year, the effigy of Ravana was burnt between 5.30 pm and 6 pm, but this year it could not happen as Navjot Kaur Sidhu, who was the chief guest at the event, "got late". The effigy was burnt around 7 pm. "Because of darkness, the tragedy occurred," he added.

According to villagers, the burning of Ravana effigy as part of Dussehra celebrations has been taking place at the same venue for over 20 years. But, what has been a source of joy and excitement to the young and the old for over two decades turned out to be a nightmare on Friday.