China says that Indian troops crossed the border at Sikkim to stop the construction of a road that it is entitled to build on its own turf on a plateau it calls Donglang. Bhutan and India say the area -- known as the Doklam plateau in India - is Bhutanese. 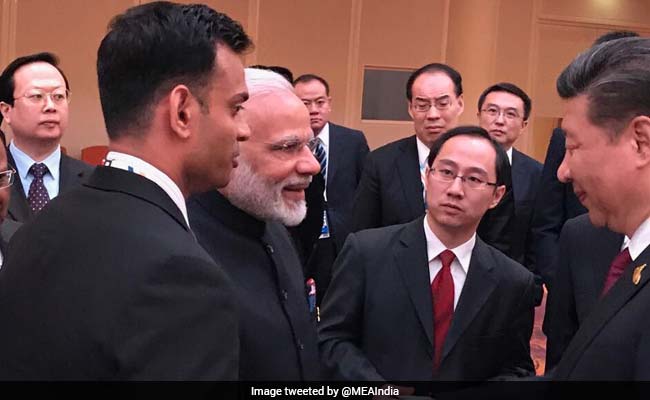 PM Modi and China's Xi Jinping had met on the sidelines of G-20 summit in Hamburg.

Washington: The Pentagon has encouraged India and China to engage in a direct dialogue free of any "coercive aspects".

"We encourage India and China to engage in direct dialogue aimed at reducing tensions and free of any coercive aspects," Gary Ross, a Defence Department spokesman told PTI. Over the past week, the US State Department too have been making similar statements, but Pentagon has sought direct dialogue between India and China on reducing tension "free of any coercive aspects".

National Security Advisor Ajit Doval heads to Beijing to attend a meeting of BRICS later this month. During his visit, Mr Doval is expected to talk with his Chinese counterpart on this issue. Responding to questions, the Pentagon refused to take sides on the issue.

"We refer you to the Governments of India and China for further information. We encourage India and China to engage in direct dialogue aimed at reducing tensions. We are not going to speculate on such matters," Mr Ross said when asked if the Pentagon fears escalation of tension between India and China. Early this week, a top Pentagon Commander told lawmakers that China is exploiting its economic leverage as a way to its regional political objectives.

"The Chinese have shown their willingness to exploit their economic leverage as a way to advance their regional political objectives. As China's military modernisation continues, the United States and its allies and partners will continue to be challenged to balance China's influence," General Paul Selva, USAF, said in written response to questions to the Senate Armed Services Committee for his nominee for reconfirmation as Vice Chairman of the Joint Chiefs of Staff.

Promoted
Listen to the latest songs, only on JioSaavn.com
General Selva said deterring war is an exercise in influencing China's decision calculus, making diplomacy preferable to conflict and managing crises in such a manner that they do not unintentionally escalate.

"To do this, the Joint Force will engage with the Chinese military within Congressionally mandated limits, build alliance capacity through close cooperation, and uphold international law through appropriate operations," he said in written response to the questions.