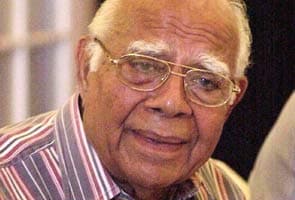 New Delhi: In a major embarrassment to the BJP, which has spearheaded the Ram Temple movement and Hindutva agenda, the party's Rajya Sabha member Ram Jethmalani today termed Ram, the protagonist of Ramayana, as a "bad husband".

Speaking at a function to launch a book on a man-woman relationship, Mr Jethmalani said "Ram was a bad husband. I don't like him at all. Just because some fisherman said something, he sent that poor woman (Sita) to exile."

He went on to take a jibe at Lakshman by saying he was "even worse". He said, "When Sita was abducted, Ram asked him to go and find her as she was abducted during his watch. Lakshman simply excused himself saying she was his sister-in-law and he never looked at her face, so he wouldn't be able to identify her", Mr Jethmalani said.

Mr Jethmalani's remarks came only days after his party president Nitin Gadkari's faux pas when he equated the IQ of spiritual leader and patriot Swami Vivekananda and underworld don Dawood Ibrahim in Bhopal on Sunday. Mr Gadkari later regretted his remarks but said he was quoted out of context.

Ironically, Mr Jethmalani had supported his son Mahesh's decision to quit BJP's National Executive Committee after Mr Gadkari's remarks. He said, "I fully approve of the action of my son after this Vivekananda episode. I think we don't need to be associated with the party which he (Gadkari) is leading... nothing against him personally."

Mr Jethmalani has front-lined the revolt demanding the removal of the party's president after charges of corruption against Mr Gadkari.