Amit Kumar was undergoing treatment at an Army hospital in Srinagar and was airlifted to the AIIMS on Friday night. 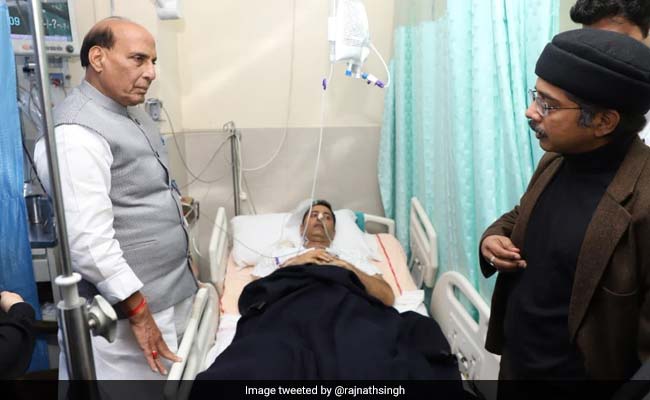 "I salute his courage and the bravery exhibited by his team," Rajnath Singh tweeted.

Union Home Minister Rajnath Singh visited AIIMS in Delhi on Sunday to enquire about the health of Deputy Inspector General of Jammu and Kashmir police Amit Kumar, who was injured during an encounter with Jaish-e-Mohammed terrorists in Pulwama last week.

"Visited AIIMS to inquire about the health of DIG @JmuKmrPolice, Shri Amit Kumar who was severely injured in a recent counter terror operation in Pulwama. Officers like him lift the morale of forces with their action. I salute his courage and the bravery exhibited by his team," Mr Singh tweeted after meeting Amit Kumar.

The DIG had received a gunshot wound in the abdomen during the encounter last Monday in Pulwama's Pinglan area, about 12 km from where a suicide bomber belonging to the Jaish-e-Mohammed drove his explosive-laden vehicle into a CRPF bus on February 14, killing over 40 CRPF soldiers.

Mr Kumar was undergoing treatment at an Army hospital in Srinagar and was airlifted to the AIIMS on Friday night. Union Minister of State for Home Kiren Rijiju had visited him at the hospital on Saturday, officials said.

During the encounter, 5 security personnel including an Army major, a civilian were killed. Three Jaish-e-Mohammed terrorists also died during the encounter. An Army brigadier was also injured when a bullet ricochetted and hit him on his leg.