Possibly alluding to the power of social media and mobile apps, Rajnath Singh said, "Today the range (marak Kshamta) of a mobile has crossed even the reach of a missile". 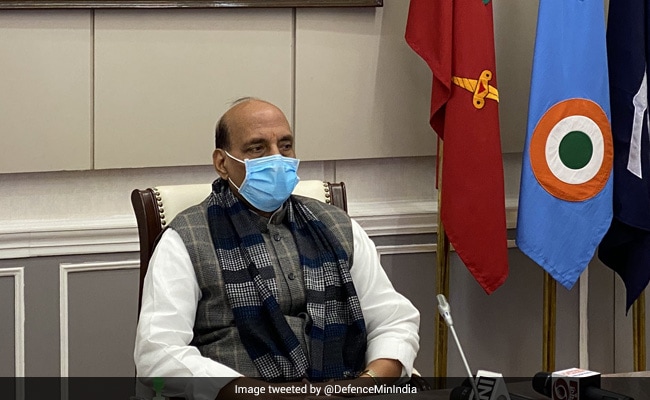 Apparently referring to the impact of social media in conflicts between nations, Defence Minister Rajnath Singh on Friday said the reach of the mobile phone now was bigger than that of a missile.

Addressing the annual Military Literature Festival, Mr Singh warned that different kinds of security threats may emerge in the future

"This event is important from another point of view," he said through video conference. "As times change, the nature of threats and wars is also changing. In the future, other security-related issues may come before us."

He added that conflicts are gradually becoming "comprehensive" in the manner never imagined earlier.

Possibly alluding to the power of social media and mobile apps, he said, "Today the range (marak Kshamta) of a mobile has crossed even the reach of a missile".

He added that the enemy can now reach people even without crossing any borders, and urged everyone to play the role of a soldier.

"We should remain alive to these dangers and save ourselves from wrong and misleading information and save others too, and festivals like this can play a key role in this," he said, urging literary figures to make use of their talent to the full for this.

The defence minister did not specifically refer to China.

But in recent months, since the standoff between the two sides began at the Line of Actual Control, India has banned several Chinese mobile apps, citing concerns related to national security and privacy.

These included the popular TikTok and WeChat apps.

Mr Singh said this year's edition of the festival was special as the country is observing the 50th year of 1971 India-Pakistan War.

He also said there are many veterans around who fought that war and urged the youth to learn from them.

The defence minister said war games played on mobile phones were no match to their real-life experiences.

Singh said he was scheduled to participate in last year''s edition of MLF but could not come to Chandigarh due to a Parliament session.

But he had kept myself regularly updated on the festival events, including book releases and panel discussions, the minister said.

"All these events give a close insight to the people, especially the youth, into military life," he said.

He said the festival also gave common people a better understanding of the functioning of the armed forces and instilled patriotic spirit in the youth.

"Punjab for decades has been the land of the brave and it is only natural that such festivals started from here. The festival is also a tribute to those warriors who gave up everything for the nation''s sake," he said.

The annual event is a joint initiative of the Punjab Government and the armed forces. It ends Sunday.