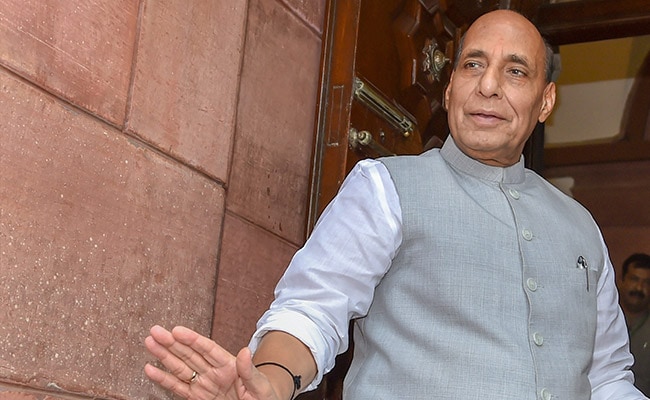 Rahul Gandhi will be "Ra-fail" in his endeavour to "mislead" people on Rafale, said Rajnath Singh (PTI)

Rahul Gandhi will end up being "Ra-fail" in his endeavour to "mislead" people on the Rafale deal, Home Minister Rajnath Singh said today as he took a swipe at the Congress president amid the raging political storm over the purchase of the fighter jets.

"It is not Rafale...It is Ra-fail (Rahul-fail)...He will be a failure. Rahul Gandhi knows the truth about the Rafale deal but is trying to mislead the people on the issue," Mr Singh told a meeting of the Kerala state council of the BJP.

The meeting was called to ratify the appointment of PS Sreedharan Pillai as the party's new state chief.

In an apparent reference to Pakistani leaders targeting PM Modi over the Rafale issue, Mr Singh said, "You know the truth but knowingly or unknowingly you are talking in support of Pakistan."

After New Delhi cancelled the meeting between the foreign ministers of India and Pakistan on the sidelines of the UN General Assembly over the killing of policemen in Jammu and Kashmir, Pakistan's Information and Broadcasting Minister Fawad Hussain said it was done to divert the attention from the Rafale "scandal".

"We reject war mongering by ruling elite of India everyone know Indian Govt strategy is to use hate mongering against Pak basically to bail PM Modi from call for resignation post French jets Rafael deal and divert attention of Indian public from this mega corruption scandal," Mr Hussain had tweeted.

"If you repeat a lie many times, people are bound to start believing it. That is what the opposition leaders are doing on the Rafale issue," Mr Singh said.

The home minister spoke about pro-people programmes of the NDA government, and asserted Prime Minister Narendra Modi will steer the BJP back to power with a "thumping majority" in the 2019 elections.

"It is not named after Modi. US president Barack Obama had introduced a health insurance scheme for American people during his presidecy. It was called Obamacare. Here it is Ayushman Bharat. It is not Modicare," Mr Singh said.

The union minister said the health insurance scheme launched by the government was "Modi Kavach" (armour) for the poor who cannot afford expensive medical treatment.

He also asked Chief Minister Pinarayi Vijayan to put an end to political violence in Kerala and promised the centre's full support in rebuilding the state after the devastating floods.