Defence Minister Rajnath Singh tweeted, "Paid tributes to the martyred soldiers who sacrificed their lives while serving in Siachen"

Rajnath Singh today flew to Siachen Glacier - the world's highest battlefield - in his first visit outside the national capital as Defence Minister. He tweeted photos of his meeting with the soldiers at the high-altitude base where all of them, in heavy clothing to protect from frost bite, are seen having jalebis.

"Visited a forward post and Siachen base camp today and interacted with the Army personnel serving in this region which is also known as the 'the highest battle field in the world'," the new Defence Minister tweeted.

In a white jacket, Mr Singh posed for a photo on the glacier where the temperature dips to minus 60 degree Celsius in winter.

"I am proud of all Army personnel serving in Siachen who are leaving no stone unturned to defend our motherland. I am also proud of their parents who have sent their children to serve the nation by joining the Armed forces. I will personally send a thank you note to them," he tweeted.

Paid tributes to the martyred soldiers who sacrificed their lives while serving in Siachen.

More than 1100 soldiers have made supreme sacrifice defending the Siachen Glacier.

The nation will always remain indebted to their service and sacrifice. pic.twitter.com/buWxgv6Nmg

"Paid tributes to the martyred soldiers who sacrificed their lives while serving in Siachen. More than 1100 soldiers have made supreme sacrifice defending the Siachen Glacier. The nation will always remain indebted to their service and sacrifice," the Defence Minister said.

Senior Army officers accompanied the Defence Minister on his first visit to the Siachen Army base.

Mr Singh will meet Army personnel in Srinagar later in the evening.

The Army has been posted at Siachen Glacier since 1984 when India carried out Operation Meghdoot to push back Pakistani forces and took the peak. 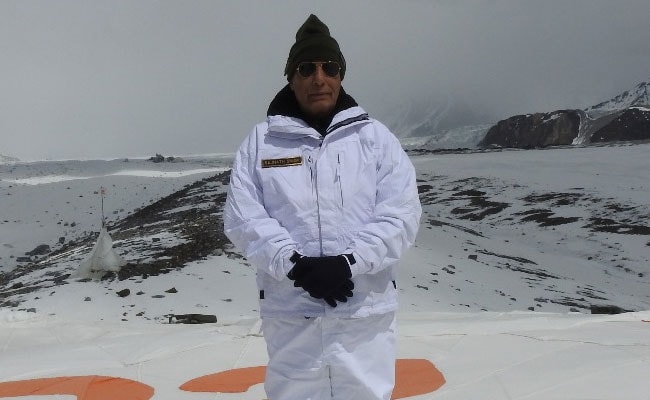 Soon after taking over as Defence Minister last week, Mr Singh had told the officers in charge of departments of the ministry to prepare detailed presentations for him on ongoing projects.

The Siachen base camp is at an average altitude of 20,000 feet. It is also one of the coldest battlefields in the world. Soldiers have to battle frostbite and high winds, and avalanches and landslides are common at the glacier during winter.