"Will Never Forget This Day": Rajinikanth In Tribute To Karunanidhi

DMK patriarch M Karunanidhi died this evening after being hospitalized in Chennai for more than 10 days. Rajinikanth said it would be a "black day" in his life 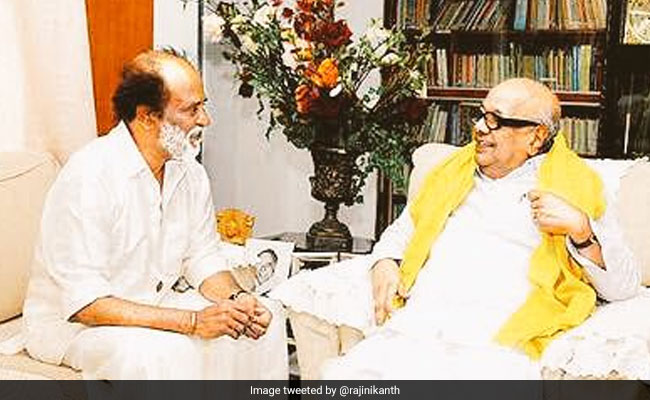 The death of "Kalaignar" M Karunanidhi would remain a "black day" in his life, actor-politician Rajinikanth said today. "I will never forget this day in my lifetime," said the 67-year-old, whose fans credit him with contributing to a huge DMK victory in 1996 with a comment that was a snub to AIADMK chief J Jayalalithaa.

The DMK patriarch died this evening after being hospitalized in Chennai for more than 10 days. Kalaignar, as he is known, had entered politics full-time after a flouring career as a script writer. His links with the film industry was deep.

In a tweet this evening, Rajinikanth said, "This is a black day I can not forget in my lifetime of my artist's day. Let his soul rest in peace".

His last tweet was also a photo with Karunanidhi, when he went to wish him for his 94th birthday in June.

Before the 1996 assembly polls in Tamil Nadu, Rajinikanth had famously commented "even God can't save Tamil Nadu" if Jayalalithaa's AIADMK returned to power. Mr Karunanidhi's DMK swept the election, riding a wave of anti-incumbency.

Later, after Jayalalithaa's death in December 2016, he had expressed regret, saying "I had hurt her. I was a key reason for her (party's) defeat".

The body of the DMK president is being taken to his home in Gopalapuram in Chennai and will then be taken to Rajaji Hall for people to pay their last respects. Karunanidhi's mortal remains will be laid to rest tomorrow.