Rajinikanth Turns 70 Ahead Of Party Launch, Prime Minister Wishes Him

Tamil actor and aspiring politician Rajinikanth celebrates his 70th birthday today, only weeks ahead of the launch of his political party on December 31, making it a momentous occasion not merely for the movie icon but also for Tamil Nadu and Indian national politics.

The veteran artiste, born Shivaji Rao Gaekwad, had last week announced that he will launch his long-anticipated political party in January, five months before the Tamil Nadu election in 2021.

This gives the actor's 70th birthday a whole new ring of excitement. His fans had begun assembling before his residence in Chennai this morning, holding banners and sporting T-shirts printed with his photographs. 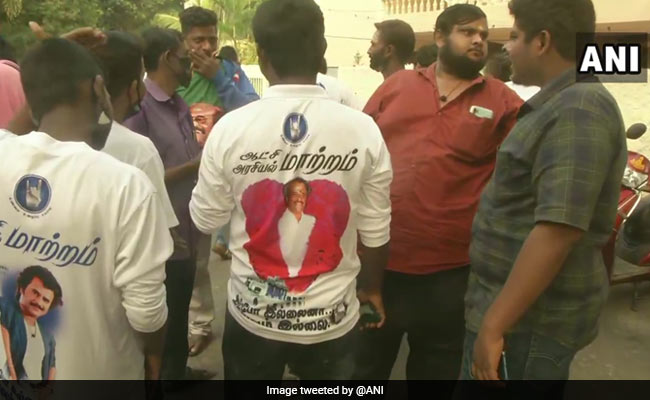 A number of them, especially those associated with the Rajini Makkal Manram, a forum of the star's fans, will be involved in charity work to mark the day like they do every year.

Meanwhile, early this morning, Prime Minister Narendra Modi wished him in a tweet.

Dear @rajinikanth Ji, wishing you a Happy Birthday! May you lead a long and healthy life.

A day earlier, Tamil Nadu Deputy Chief Minister O Panneerselvam, who is also the coordinator of the All India Anna Dravida Munnetra Kazhagam (AIADMK), wished Rajinikanth with a tweet in Tamil. Last week he had welcomed Rajinikanth's announcement of his political debut and even hoped for an alliance.

The AIADMK is one of the two poles of Tamil Nadu politics - the DMK being its rival. The two parties will be keenly watching the moves of Rajinikanth's new outfit, which the actor said last week, will follow "spiritual secular politics" with no caste or religion.

On Friday, ace musician and composer A R Rahman, who has been associated with several of Rajinikanth movies, released a common display picture marking the occasion on Twitter on behalf of the veteran actor's fans.

Extremely privileged to release superstar @Rajinikanth's 70th Birthday CDP on behalf of his fans.
Wishing you a great birthday and good health!#HBDSuperstarRajinikanthpic.twitter.com/SYWxRyOFqD