Ashok Gehlot said the government will review if the investigation was unfair. (File)

A political fight broke out on Saturday after a dairy farmer, who was beaten to death in April 2017 by cow vigilantes in Rajasthan, was named in a chargesheet along with his sons, drawing attention to the legal treatment of victims of mob killings and cow vigilantism in the country. Rajasthan Chief Minister Ashok Gehlot defended his government, saying the victim was not indicted.

Pehlu Khan and his two sons, who were transporting cows that they had bought at a cattle fair in state capital Jaipur to their home in Haryana when they were attacked by a mob, were accused of transporting the animals without permission.

"The case was investigated in the past, under the BJP government, and chargesheet was filed. If any discrepancies are found in the investigation, the case will be re-investigated," Ashok Gehlot said, squarely blaming the previous administration. 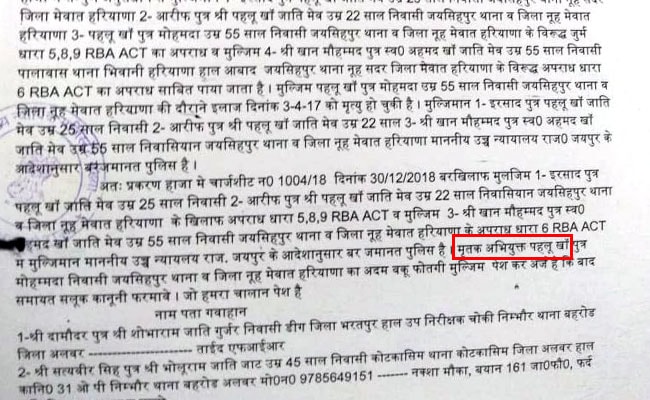 The chargesheet names Pehlu Khan as "deceased accused" in Hindi.

He also tweeted that Pehlu Khan wasn't indicted but "will see if investigation was done with predetermined intentions". A copy of the chargesheet seen by NDTV described Pehlu Khan as a "deceased accused".

This is a separate case which was registered and investigated under previous government in 2017-18 against Mr Arif, Mr Irshad and Mr Khan Mohd (Transporter),
3/4

The BJP accused the Congress of double standards. Delhi BJP chief Manoj Tiwari said, "We are always in favour of justice."

Congress in "Power" is replica of BJP ,Muslims of Rajasthan must realise this,reject such individuals/organisations who are brokers of congress party,& start developing their own independent political platform ,70 years is a long time please CHANGE https://t.co/gLsimg1m50

Pehlu Khan and his sons were stopped on the Jaipur-Delhi National Highway by cow vigilantes and were severely beaten up. A cellphone video showed Pehlu Khan being yanked by the neck, thrown to the ground and kicked. Mr Khan died in hospital two days later.

Two First Information Reports (FIRs) were filed in the case - one was against eight people who allegedly lynched the dairy farmer, and the other was against him and his sons for transporting cattle allegedly without the district collector's permission.

The latest chargesheet was filed by the Rajasthan government in the second FIR. Pehlu Khan cannot be prosecuted as he died, but it will continue against his sons - much to the chagrin of rights activists.

The chargesheet accuses Pehlu Khan of wrongdoing under multiple sections of a Rajasthan law that seeks to protect cattle slaughter and smuggling.

Eight men accused of beating him to death are out on bail and two of them are untraceable.