The BJP leader alleged that the Congress earlier showed its "anti-Hindu" mentality through its stand on the Ram Sethu issue. 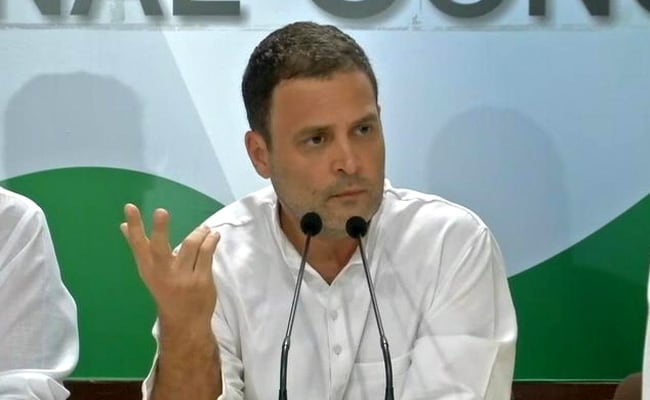 Rahul Gandhi was slammed over another Congress leader's post. (File)

BJP MP Anurag Thakur has slammed a Facebook post by a former Congress legislator on Janmashtami, drawing Rahul Gandhi's attention to the "anti-Hindu" sentiment displayed there.

Former Congress MLA from Jawali in the Kangra district Neeraj Bharti's post carried an illustration from the story of Krishna, watching gopis bathe in the Yamuna. It asked "Aaj Iska Janmadin Hai Kya" (Is today His birthday)."

Alleging that Mr Gandhi's Kailash Mansarovar Yatra is a farce, the BJP chief whip in parliament stated, "Such a derogatory post under your protection is an attack on the religious sentiments of the people." Mr Thakur also attached two photographs with his tweet where Mr Bharti can be seen with former Himachal Pradesh Chief Minister Virbhadra Singh.

The BJP leader alleged that the Congress earlier showed its "anti-Hindu" mentality through its stand on the Ram Sethu issue.

Meanwhile, Kangra Superintendent of Police Santosh Patial told PTI that the district police had not received any complaint in this connection.

"If we receive any complaint, appropriate legal action will be taken against him," the police offier said.